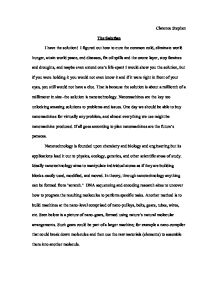 Clarence Stephen The Solution I have the solution! I figured out how to cure the common cold, eliminate world hunger, attain world peace, end diseases, fix oil spills and the ozone layer, stop famines and droughts, and maybe even extend one's life-span! I would show you the solution, but if you were holding it you would not even know it and if it were right in front of your eyes, you still would not have a clue. That is because the solution is about a millionth of a millimeter in size-the solution is nanotechnology. Nanomachines are the key too unlocking amazing solutions to problems and issues. One day we should be able to buy nanomachines for virtually any problem, and almost everything we use might be nanomachine produced. If all goes according to plan nanomachines are the future's panacea. Nanotechnology is founded upon chemistry and biology and engineering but its applications lead it out to physics, ecology, genetics, and other scientific areas of study. Ideally nanotechnology aims to manipulate individual atoms as if they are building blocks-easily used, modified, and moved. In theory, through nanotechnology anything can be formed from "scratch." DNA sequencing and encoding research aims to uncover how to program the resulting molecules to perform specific tasks. Another method is to build machines at the nano-level comprised of nano-pulleys, belts, gears, tubes, wires, etc. ...read more.

I Honors Pre-IB, and Biology at SCC this year), one year of chemistry (Chemistry I Honors Pre-IB, but hopefully more to come), and I have taken every single math course I could get my hands onto all at the competition level (Algebra I honors/gifted, Algebra II Honors Pre-IB, Geometry & Trigonometry Honors Pre-IB, Calculus at Seminole Community College, AP Calculus AB, AP Calculus BC, IB Math Higher Level, AP Statistics, Statistical Methods at Seminole Community College). I have been competitive in both mathematics and science: brain bowl, science bowl, science Olympiad, JETS, Math Counts, and Mu Alpha Theta. As a result, I feel like my small reserve of knowledge is always hungry for additional understanding of the world we live in through mathematical and scientific concepts. I have told myself that it is completely possible to understand this world through science and mathematics within one lifetime (however that cannot be completed without help from other knowledgeable individuals). Reading about nanotechnology excited me because my generation is the generation that will be moving this field of science and engineering forward in the future. That means that there is a possibility that one of my classmates (or I) could be the individual who cures the common cold. Honestly, I am not sure exactly what I want to be when I grow up, but if I end up as a physicist or mathematician I plan on studying ...read more.

Science and mathematics are recursive, without the precedents we would not have what we have now. Democritus in the early Greek era reasoned the existence of a basic unit of life, in turn Rutherford greatly advanced the understanding of the structure of an atom establishing the properties of the nucleus and electrons (later Bohr perfected that model), Einstein formulated E=mc�, Scientists in the 1930s (using machines that could break apart the nuclear cores of atoms) confirmed Einstein's formula E=mc�, Bohr paved the way for fission through his theories recognizing the utility of Uranium-235, in turn the developments of the cyclotron for magnetic separation and gaseous diffusion allowed scientists to obtain large quantities of Uranium-235, and eventually the brilliant minds of the Manhattan Project were able to produce the all powerful nuclear bomb. The so-called "final" product is the result of the discoveries of scientists from the past. Every principle builds on the next; as knowledge and understanding become deeper and more complex so does our technology. History and English and foreign language will never be as practical as science and mathematics. Mathematics and science both focus on the world we live in so it is only appropriate that the world we live in focuses on them. They are the solution and will be the solution for all problems to come. Science and mathematics, to put it simply, are the art of problem solving. ...read more.