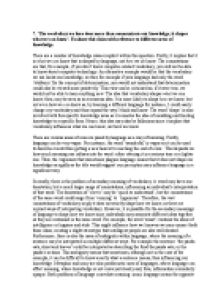 ﻿7. ?The vocabulary we have does more than communicate our knowledge; it shapes what we can know?. Evaluate this claim with reference to different areas of knowledge. There are a number of knowledge issues implicit within this question. Firstly, it implies that it is what we can know that is shaped by language, not how we do know. The connotations are that, for example, if you don?t know computer-related vocabulary, you will not be able to know about computer-technology. An alternative example would be that the vocabulary we use limits our knowledge, so that, for example if your language had only the word ?stubborn? for the concept of determination, you would not understand that determination could also be viewed more positively. This view can be criticised as, if it were true, we would not be able to learn anything new. The idea that vocabulary shapes what we can know, then, may be seen as an erroneous idea. It is more likely to shape how we know, but not even how we can know as, by learning a different language for instance, I could easily change my vocabulary and thus expand the way I think and know. ...read more.

Besides conveying the idea that he is writing, the metaphor suggests that his composition is a healing process to him. Consequently, language affects how we know. The statement in the title states a view similar to that of someone who would support the Sapir-Whorf theory, a hypothesis that the language we use influences the way we think and therefore how we know[2]. The deterministic form of this hypothesis implies that our language determines and thus limits what we can know, whereas a more moderate Whorfianism implies that language influences the way we know, but not what we can know. For instance, it could be argued by a strong supporter of the Sapir-Whorf hypothesis that the metaphor ?chair leg? in English means that English-speakers will not understand that chairs are not alive. However, this is not true. Although we use this metaphor, people understand that chairs are not living, implying that language does not restrict knowledge. I would argue that the connotations of a word such as ?chair leg? do not limit knowledge, as this would imply that we could not learn new languages that have different words for ?chair leg?: we would not understand the new concepts. ...read more.

A poll asking if we should ?protect? ?unborn children? would be biased, and thus language can affect the human sciences. The implications are that the human sciences can be affected by language, but wholly are less affected than an area like art, as the empirical aspect of the subject means language does not always affect knowledge. The statement made in the question is an important one. Vocabulary has been shown to influence the way we know, from the knowledge we hold about different cultures to our ethical principles. However, the view that it shapes what we can know, suggesting that vocabulary significantly limits knowledge, seems fallacious, as it would not let us learn anything new. Vocabulary can occasionally impact how we know, but sometimes it does not. Furthermore, not all language is vocabulary, the importance of non-verbal language, for example sign language, challenges the role of vocabulary in communication, so that one would have to examine the problems of communication within these types of languages to deduce their impact on knowledge. We must also use various other ways of knowing, such as reason and perception to determine whether our vocabulary limits our knowledge, and hence to gain that knowledge through those other ways of knowing. It is only in this way that we will understand the limits of language itself and maybe even strive to remedy them. ...read more.