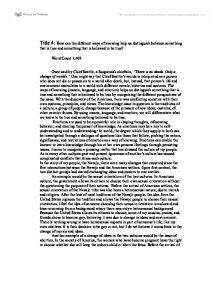 Title 4: How can the different ways of knowing help us distinguish between something that is true and something that is believed to be true? Word Count 1,468 Once said by Chief Seattle, a Suquamish chieftain, "There is no death. Only a change of worlds." One might say that Chief Seattle's words is interpreted as a person who does not die or passes on to a world after death, but, instead, that person's life and environment assimilates to a world with different morals, histories and customs. The ways of knowing (reason, language, and emotion) helps us distinguish something that is true and something that is believed to be true by recognizing the different perspectives of the issue. With the discovery of the Americas, there was conflicting societies with their own customs, principles, and views. The knowledge issue in question is the traditions of a culture, a group of people, change because of the pressure of new ideas, customs, of other exterior forces. By using reason, language, and emotion, we will differentiate what we know to be true and something believed to be true. Emotions are used to be a powerful role in shaping thoughts, influencing behavior, and steering the pursuit of knowledge. As emotions may be a key to self-understanding and to understanding the world, the degree which they supply to both can be investigated through a dialogue of questions like those that follow, probing the nature, significance, and restrictions of emotion as a way of knowing. ...read more.

Although, the women of my family had never aborted a child, even with the idea of abortion is generally acceptable in American culture. I believe the Navajo tradition of the sacredness of life is strong in my family; the thought of abortion is by no means the choice in the women in my family. Language is a way of knowing that is a common human activity that it is without doubt taken for granted. Language can be a major component of a society's culture and traditions, including my culture, the Navajo. After the conclusion of the "Navajo Wars" in the 1860s, which led to the defeat of the Navajo tribe, the Dawes Act, an act enforced by Congress to force American Indians to assimilate to the white culture, created Navajo boarding schools were created to replace the traditional cultures of the Navajo with the mainstream American culture. At first, the government forced countless Navajo families to send their children to these boarding schools. But, eventually, the Navajo families decided to send their children to boarding schools because there were no other schools that were available for them. Among these children my great grandfather, grandfather and father. They were attendees of the Navajo board schools. At these boarding schools, the Navajo children were force to eradicate the "Indian" in them by cutting their hair, forgetting their language, and surrender their traditional clothing. ...read more.

Ethics is an area of knowledge that is a part of our daily lives and therefore should also be tested. Like history, it also cannot be evaluated scientifically or empirically. Every individual is affected by a principled or moral structure which is acknowledged by their own society. In the early years of exploration, American settlers had the general thought of Native Americans to be "savages" and "barbaric", due to the nature of their individual cultures. But, contrary to the shared thought of the American culture, my culture had something created long before the existence of it happening in the United States: the equality of men and women. In the culture of the Navajo, women had an equal status of men, due to the stories told by the medicine men orally to their people. how is it that the dominant culture, such as the United States, call the culture of the Navajo inferior due to the culture they follow, despite the fact that the Navajos had equality before the American culture ever did? It seems then, that the nature of human societies collides together and begins to learn each others culture. Although, the exchange of ideas and customs can resort to violence, due to the worlds apart of cultures, in the end, the exchange of ideas can turn out to be positive. Through the ways of knowing, people are capable to discover the different cultures that occupy this Earth. ...read more.