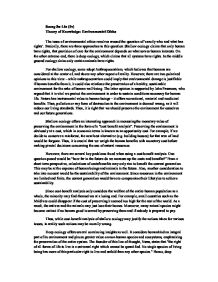 Soong Su-Lin (5v) Theory of Knowledge: Environmental Ethics The issue of environmental ethics revolves around the question of 'exactly who and what has rights'. Basically, there are three approaches to this question: Shallow ecology claims that only human have rights, that provision of care for the environment depends on what serves human interests. On the other extreme end, there is deep ecology, which claims that all systems have rights. In the middle ground ecology claim only certain animals have rights. For shallow ecology, some adopt Anthropocentrism, which believes that humans are considered at the center of, and above any other aspect of reality. However, there are two polarized opinions to this view - while anthropocentrism could imply that environmental damage is justifiable if human benefits from it, it could also reinforce the preservation of a healthy, sustainable environment for the sake of human well-being. The latter opinion is supported by John Passmore, who argued that it is vital we protect the environment in order to sustain conditions necessary for human life. Nature has instrumental value to human beings - it offers recreational, material and medicinal benefits. ...read more.

Thus, while cost-benefit analysis of shallow ecology may justify the actions taken for various issues, in reality such actions may be morally wrong. Deep ecology offers several convincing insights as well. It considers humankind an integral part of its environment and places greater value on non-human species and ecosystems, emphasizing the preservation of the entire system. The founder of this line of thought, N�ss, states that "the right of all forms of life to live is a universal right which cannot be quantified. No single species of living being has more of this particular right to live and unfold than any other species." Hence, deep ecologists believe that environmental damage is never justifiable because it creates disorder in the ecosystem. For example, felling trees for wood would kill the trees as well as destroy the habitat for many other species. Hence, it is deemed morally wrong. Concerning several issues, deep ecology seems a better approach compared to shallow ecology. While shallow ecology may justify the reckless killing of an entire species of animals for the sake of improving our standards of living, deep ecology would certainly disapprove of it. ...read more.

In the old testament, he gave man the right to rule over the earth: 'Then God said, "Let us make man in our image, in our likeness, and let them rule over the fish of the sea and birds of the air, over the livestock, over all the earth, over all the creatures that move along the ground.' Genesis 1:26. In this sense, because human beings are elevate to a level of special creation, humans should take responsibility over protecting the environment, because all other creatures do not have the ability to. Since God also stated that the main purpose of creation is to glorify Him, humanity placing its own desires ahead of the teachings of the Bible leads is viewed as selfish and sinful. The rights of all systems are best seen as a continuum or spectrum. Every system sits somewhere along this line, and on the extreme right end is man, who was ultimately is given supreme right over the earth. Thus, we should take into a certain amount of consideration when making decisions which may cause harm to animals or other systems. Completely embracing the anthropocentric view would be both selfish and morally wrong. ?? ?? ?? ?? ...read more.