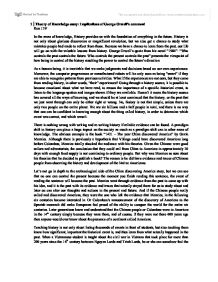 In the areas of knowledge, History provides us with the foundation of everything in the future. History is not only about glorious discoveries or magnificent revolution, but we also get a chance to study what mistakes people had made to reflect from those. Because we have a chance to learn from the past, our life will go on with the valuable lessons from history. George Orwell's quote from his novel "1984": "Who controls the past controls the future. Who controls the present controls the past" presents the viewpoint of how being in control of the history resulting the power to control the future's direction. As a human being, it is inevitable that we make judgments and decisions based on our own experiences. Moreover, the computer programmes or manufactured robots will be only seen as being "smart" if they are able to recognise patterns from previous activities. What if the experiences are not ours, but they come from reading history, in other words, "their" experiences? ...read more.

Let's not go in depth to the archaeological side of the China discovering America story, but we can see that no one can control the present because the moment you finish reading this sentence, the event of reading the sentence will become the past. Menzies went through evidence from the past to come up with his idea, and it is the past with its evidence and traces that actually stayed there for us to study about and later on can alter our thoughts and actions in the present and future. And if the Chinese people really sailed and discovered Americas, they were the one who left the evidence that Menzies, in the following six centuries become interested in. Or Columbus's announcement of the discovery of Americas to the Spanish monarch did make Europeans feel proud of the ability to conquer the world for the entire six centuries. Later generations know and understand that the Chinese people or Columbus were in Americas in the 14th century simply because they were there, and of course, if they were not there 600 years ago then anyone would ever know about the presence of a continent called Americas. ...read more.

When those children grow up and have their own children, even before their kids get a chance to read the history text books, parents will again pass the hatred feeling to them towards what happened hundred years ago. Neighboring countries are supposed to help each other out, but this result the political distance between those countries grow even further. Everyone wants a good past, good records, but this demand is only fine if it would not do any harm to anybody. No matter how much I agree with Orwell's quote, no matter how much I appreciate history, I still believe, rather than asking "What did we do wrong", it is at best to recognise "How can we do better?". The outward looking and careful consideration for the future is the direction that we should all take. Humans are in charge of the human history, we make love, we make wars and we make history for people to look at us. We had better behave! We control the past, the present, hence we are responsible for the future of our children. 1 Theory of Knowledge essay: Implications of George Orwell's comment Ken 13V ...read more.