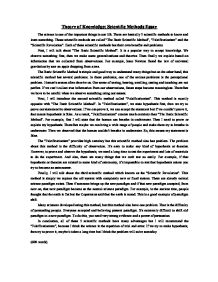 If we can prove it, we can accept the statement but if we couldn't prove it, that means hypothesis is false. As a result, "Falsificationism" creates much certainty than "The Basic Scientific Method". For example, first I will state that the human can breathe in underwater. Then I need to prove or explain my hypothesis. Therefore maybe we can bring a wide range of people and make them try to breathe in underwater. Then we observed that the human couldn't breathe in underwater. So, this means my statement is false. The "Falsificationism" provides high certainty but this scientific method also has problem. The problem about this method is the difficulty of observation. It's easy to make any kind of hypothesis or theories. ...read more.

For example, in the ancient time, people thought that the earth is flat but the Copernicus said that the earth is round. This is a good example of paradigm shift. Many sciences developed using this method, but this method also have one problem. That is the difficulty of persuading people. Everyone accepted and believing present paradigm. It's extremely difficult to shift old paradigm to a new paradigm. To do this, you need very strong evidence and a power of persuasion. In conclusion, all of these 3 scientific methods have many advantages but I will recommend the "Falsificationism", because I think the science is the repetition of trial and error. If we try to make hypothesis, then try to prove it, maybe it takes a long time but I think the problem will solve someday. (600 words) ...read more.