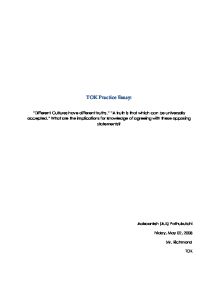 TOK Practice Essay: "Different Cultures have different truths." "A truth is that which can be universally accepted." What are the implications for knowledge of agreeing with these opposing statements? Aakaanksh (A.K) Pothukutchi Friday, May 02, 2008 Mr. Richmond TOK According to Albert Einstein, one of the great minds of the human races, "Truth is what stands the test of time." The seemingly innocent looking question: "What is truth," appears in one's mind. In an effort to better humanity the elite minds have concocted three different theories of truth, none of which is individually satisfactory, but combined provide a glance into the "truth" about truth. The word truth, in context of the question, is a statement which conforms to fact and is commonly/universally accepted as the reality or actuality. At first glance, both statements appear to be contradictory in nature, as they transmit conflicting two conflicting ideas of truth. The first statement conveys the idea of relativism, the belief that what is true is what is accepted by one's culture/community; while the second statement dwells mainly on the idea of absolutism, a philosophical argument which claims that a statement is either absolutely true or absolutely false, leaving no room for any middle ground. ...read more.

Strong belief in subjective truth, regardless of rhyme or reason, usually renders knowledge tricky. For example, most Asian cultures believe that a strong academic base, with little room for anything else, is the only way to succeed in life. In stark contrast, the West, generally holds the development of a wholesome personality as top draw. These contrasting beliefs have caused considerable strife amongst leading academicians around the world. A strong belief in subjective truths, almost always, leads to one society attempting to impose its "truths" upon another (in some cases multiple) society; Hitler's Nazi's attempting to brainwash the World into believing that the Aryan's (the superior race), had every right to annihilate mere mortals. Inflammatory examples such as these bear witness to the fact that "different cultures have different truths." The first statement strongly implies that truth is not universal and is relative in nature. Knowledge is defined in the, Theory of Knowledge, as justified true belief, and is made uncertain when people choose to believe a truth, with varying levels of intensity. The implications for knowledge of agreeing with the first statement are that each culture (person within the culture) ...read more.

Plus the fact that they are accepted universally constitutes to our staying sane, by anchoring us to reality, our awareness of our current existence. Another example is that of the universally accepted ethical precept "Do unto others as you want done to you." Every "thinking" human being is automatically supposed to accommodate his/her basic human instinct, which dictates a uniform code of morality, the world over. The implications for knowledge of agreeing with this statement are clearer; rarely does one have to use objective value judgments in the justification of absolute truths. The absence of personal bias and beliefs results in nearly every one gaining access to a uniform and standard form of knowledge Both statements provide different implications for knowledge, the first allowing for a more biased and personalized version of knowledge while the second relies more on universal conformity. In conclusion I believe that the implication for knowledge, if we are to agree with the two opposing statements: "Different cultures have different truths" and "Truth is that which can be universally accepted", is the realization that cultural beliefs/truths do not necessarily tantamount to universal truths and gives rise to a further understanding of the ethical and moral decisions which we undertake, despite our differential cultural upbringing. ...read more.