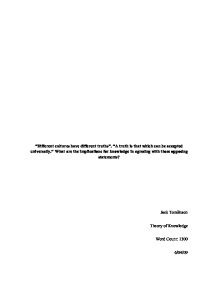 "Different cultures have different truths". "A truth is that which can be accepted universally." What are the implications for knowledge in agreeing with these opposing statements? Jack Tomlinson Theory of Knowledge Word Count: 1300 6/04/09 When first approaching these statements it appears as though they are contradictory, as they seem to convey two conflicting ideas of truth. The first statement relates to the idea of relativism, which simply refers to the belief that what is true is that which is accepted by one�s culture or community, whereas the second statement relates mainly to the idea of absolutism, which refers to an argument that claims that a statement is either completely true, or completely false, leaving nothing in between. The statements are in direct conflict with each other by means that the first leads us to imply that each individual culture has its own set of truths which do not have to be in correlation with other cultures truths, while the second directly contradicts the first by stating that nature of truth allows it to flow through all barriers (including the barrier of culture), making it universally acceptable. The implication for knowledge, if we agree with these conflicting statements, is the realization that cultural beliefs/truths are not automatically equivalent to universal truths and allows for an additional understanding of the ethical and moral decisions which we accept, regardless of our diverse cultural background. ...read more.

One�s cultural background can also influence one�s perception on matters like that of beauty. For example, the perception of beauty in some Ndebele tribes in southern Africa is that a woman stretches her neck my means of using large copper rings. The disproportion that this causes is considered remarkably beautiful in Ndebele culture. This is often viewed in western cultures peculiarly as it does not conform to the cultural truth that western culture was brought up with. In contrast, western culture seems to idolize the "perfectly" proportional body as beautiful. These examples perfectly illustrate that "different cultures have different truths." They first statement therefore illustrates that truth is not necessarily universal and culture-based in reality. The implications for knowledge of agreeing with the first statement are that each culture or the person within a culture obtains varied amounts of knowledge from different truths, or in this case, from their cultural backgrounds. In essence one�s knowledge is often modified, or refined by one�s cultural background and bias. The statement "A truth is that which can be universally accepted", in contrast, presents the idea that truth is a fact that will be accepted by the entirety of humanity, making it an idea that is accepted everywhere, an absolute truth. ...read more.

This is the reason as to why the two statements contradict one another. Thus, a truth that is universally accepted is one that is absolute and isn't as limited as a relativist truth. The fact that the universal truths are accepted by everyone gives us an awareness of reality as it is. Another example is that of the universally accepted concept "Treat others as you want to be treated" This idea tends to be accommodated by humans who live by a concept of morality and conduct, a universal truth so to speak. The implications for knowledge of agreeing with this statement become clear; hardly ever does one have to use objective judgments in the explanation of absolute truths. The lack of bias results in nearly everyone gaining access to clearer, untainted, form of knowledge. The implications for knowledge in these two statements are quite different, the first one providing a more personalized version of knowledge and the second statement conveys the idea of universal consensus. Conclusively, the implication for knowledge, if we are to concur with the two contrasting statements: "Different cultures have different truths" and "Truth is that which can be universally accepted", is the realization that cultural beliefs/truths are not necessarily equivalent to universal truths and allows for a supplementary understanding of the ethical and moral decisions which we acknowledge, regardless of our cultural background. ...read more.