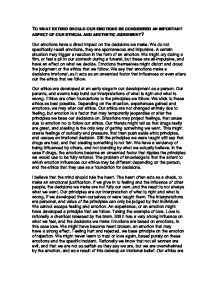 TO WHAT EXTEND SHOULD OUR EMOTIONS BE CONSIDERED AN IMPORTANT ASPECT OF OUR ETHICAL AND AESTHETIC JUDGEMENT?

TO WHAT EXTEND SHOULD OUR EMOTIONS BE CONSIDERED AN IMPORTANT ASPECT OF OUR ETHICAL AND AESTHETIC JUDGEMENT? Our emotions have a direct impact on the decisions we make. We do not specifically recall emotions, they are spontaneous and impulsive. A certain situation may trigger a reaction in the form of an emotion. We might cry during a film, or feel a pit in our stomach during a funeral, but these are all-impulsive, and have an effect on what we decide. Emotions themselves might distort and cloud the judgment or the ethics that we follow. We say that emotions make a decisions irrational, as it acts as an unwanted factor that influences or even alters our the ethics that we follow. Our ethics are developed at an early stage in our development as a person. Our parents, and events help build our interpretations of what is right and what is wrong. Ethics are often foundations to the principles we follow. We stick to these ethics as best possible. Depending on the situation, experiences gained and emotions, we may alter our ethics. Our ethics are not changed entirely due to feeling, but emotion is a factor that may temporarily jeopardise or alter the principles we base our decisions on. ...read more.

I believe the mind should rule the heart, another might believe that you should follow your feelings in order to make the right decision. The extend to which these emotions effect our ethics is different from person to person. The position of the person, might build up different ethics, and might be immune to emotions, or might be more open to emotions. A military general would react very differently to emotion compared to a counsellor for single mothers. The general will base all his decisions on efficiency and advance. He would be less influenced by the emotions of the mothers of his soldiers. Even if these mothers protested against a war, and that their sons had been fighting too long, the general bases his decisions on the efficiency of his troops, and what would be best for the army as a whole. This doesn't mean that he doesn't feel the cry of the mothers, but based on this principles and ethics, the emotion does not influence his decisions as an army man. In this case, the emotions play a very small role in the ethics and judgement of the general. In the case of the Single Mothers Counsellor, the ethics are a feature of understanding and help others. ...read more.

This doesn't mean I am going to go and buy a Volvo as soon as I have the money, this judgement would be up top my ethics, but it does show that I have an aesthetic opinion on the car. Again we encounter the problem of knowledge that not all people follow the same priorities in aesthetics. Some might see beauty in an object, but necessarily not favour it over functionality. There is also the opinion that viewing something from a distance might be best. For example one might have the opinion that having the beautiful Mona Lisa in you living room, but when we could afford the painting, we chose not to buy it, and decide to view it in the Louvre instead. The extent to which emotions effect our judgement is determined by how deeply we let our emotions affect our rational thought. Principles are generally and ideally followed, it of to what extent we let these emotions distort our judgement, this depends greatly on the person, situation and position of the person. The emotions become a part of our judgement and should therefore become a factor that is taken into account. ...read more.