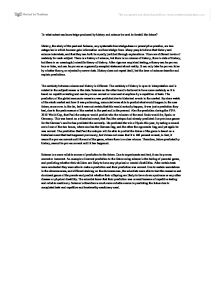 To what extent can knowledge produced by history and science be used to foretell the future?

To what extent can knowledge produced by history and science be used to foretell the future? History, the study of the past and Science, any systematic knowledge-base or prescriptive practice, are two categories in which humans gain information and knowledge from. Many people believe that history and science interrelate, and that they can both be equally justified through explanations. There are different levels of certainty for each subject. There is a history of science, but there is no science of history, there is data of history, but there is no meaningful scientific theory of history. After rigorous empirical testing, a theory can be proven true or false, and can be proven as a generally accepted statement about reality. ...read more.

By close watch of the stock market and how it was performing, economist were able to predict what would happen in the near future, some even in the far, but it was not certain that this would actually happen, it was just a prediction they had, due to the performance of the market in the past and in the present. Also the prediction during the FIFA 2010 World Cup, that Paul the octopus would predict who the winners of the semi finals would be, Spain or Germany. This was based on a historical event, that Paul the octopus had already predicted five previous games for the German's and he has predicted the correctly. He predicted the win of Spain this year, by eating a mussel out of one of the two boxes, where one has the German flag, and the other the opponents flag, and yet again he was correct. ...read more.

Science is a more reliable source of prediction to the future. Due to experiments and test, it can be proven correct or incorrect. An example of correct prediction to the future using science is the testing of parental genes, and predicting whether their children are likely to have any physical or mental disabilities. After certain tests were conducted they were able to make a prediction and their prediction was correct. Due to certain annotations in the chromosomes, and different staining on the chromosomes, the scientists were able to test the recessive and dominant genes of the parents and predict whether their offspring are likely to have down syndrome or any other disease or physical disability. The scientist knew that their prediction was correct because of repetitive testing and reliable machinery. Science is therefore a much more reliable source in predicting the future due to completed tests and repetitive and trustworthy machinery used. ...read more.