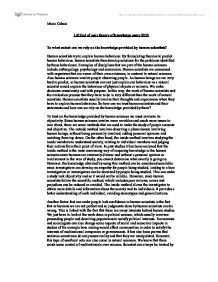 To what extent can we rely on the knowledge provided by human scientists?

However, since human scientists follow the scientific method, which includes peer reviews, errors and prejudices can be reduced or avoided. The inside method allows the investigator to obtain more details and information about the society and its individuals. It provides a better understanding of each individual, avoiding stereotypes and generalizations. Another factor that can make people lack confidence in human scientists is the fact that as humans we are not perfect and so judgments done by human scientists can be wrong. This is linked with the fact that there are many interests behind human studies. We just have to look at the work done in political science, which usually involves persuading people and deceiving populations to satisfy political interests. Economists and sociologists can also change some aspects of social and economic impacts in studies of for example how mining would affect communities in order to satisfy the interests of multinational companies or governments. It has also been proven that statistics sometimes do not present reality and that they are manipulated. However, this type of unethical acts can also occur in natural sciences. ...read more.

A big part of the knowledge we have nowadays comes from human sciences, so it is necessary for human beings to trust in these studies. We can not just rely on the knowledge provided by natural scientists since we would not be able to understand the behavior of human beings and how they we are linked with our environment and nurture. However, we should question science and not just believe in it without looking for evidence and for a complete picture of what is being presented. We are living in a globalize world that needs human scientists to provide knowledge of different cultures to help societies work together. We also know about the risks of changing traditions and cultures if human scientists get involved in a society. However, risks have always existed in the process of gaining knowledge and they have to be avoided as much as we can, but they also have to be faced in order to improve society. In this way, we can rely on the knowledge provided by human scientists by evaluating its objectivity. Concepts and theories are always improved and extended, so we must consider the fact that human scientists are trying to improve incomplete theories in order to improve human knowledge. Mario Cabani Mario Cabani ...read more.