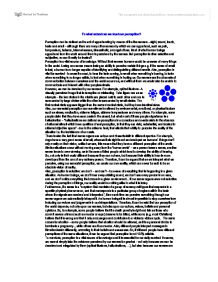 To what extent can we trust our perception?

To what extent can we trust our perception? Perception can be defined as the act of apprehending by means of the five senses - sight, sound, touch, taste and smell - although there are many other senses by which we can apprehend, such as pain, temperature, balance, internal senses, kinaesthetic, amongst others. Most of what human beings apprehend from the world around them is perceived by the senses. But perception is often selective and subjective, so can it really be trusted? Perception is a vital source of knowledge. Without their senses humans would be unaware of many things in the world. Losing one sense means losing an ability to perceive certain things e.g. if the sense of smell is lost, a human is no longer capable of identifying and distinguishing different smells. Also, perception is vital for survival - to cross the road, to hear the train coming, to smell when something's burning, to taste when something is no longer edible, to feel when something is hurting us. Our senses are the channels of communication between ourselves and the world around us, and without them we would also be unable to communicate and interact with other people/animals. ...read more.

There is also the fact that sense organs are unique and characteristic in different species. For example, dogs have a very good sense of smell, whereas their sight is not as developed as humans'. If dogs don't rely mostly on their vision, unlike humans, this means that they have a different perception of the world. Similar situations occur without moving away from the 'human world' - as a person loses a sense, another sense tends to over-develop, as in the case of blind people which tend to develop the ability of hearing. So, not only is their world different because they can not see, but because their ability to hear is more developed than the one of any ordinary person. Therefore, it can be argued that as we interpret what we perceive, using our sensorial perception, we create our own reality, which can never be said to be an absolute vision of reality. Also, perception is selective: we don't - and can't - be aware of everything that is happening in a given situation. As human beings, we don't hear every existing sound, we don't see every person in an area, and we don't notice everything that occurs in a given environment... ...read more.

Also, different people interpret messages in films/books/etc differently, according to their beliefs and awareness. So, if different people have different perceptions of the same situations, it can be argued that perception is not 100% reliable. To conclude, perception is a vital source of knowledge and it is essential for our daily survival. However, we cannot simply take the evidence perceived by our senses for granted - not only because we can be deceived and misguided by them (optical illusions, hallucinations, ...), but also because our senses are highly selective and our perception is distorted by our beliefs and opinions. So, if our perception of the world and of the vision of reality is mainly composed by our selective and distorted perception, this means that our world is composed by what we, unconsciously, chose it to be composed of, if our vision of reality is composed by what we unconsciously want to perceive as being real according to our beliefs, and if our senses can ultimately be deceived then we can't always trust our own perception of things, as it will never be an absolute and impartial analysis of information perceived by our senses. ...read more.