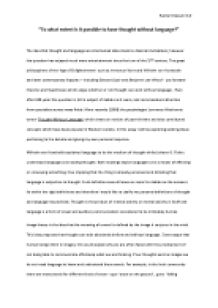 To what extent is it possible to have thought without language?

﻿Rachel Olawumi 12I ?To what extent is it possible to have thought without language?? The idea that thought and language are intertwined dates back to classical civilisations; however the question has enjoyed much more entertainment since the turn of the 17th century. The great philosophers of the ?Age of Enlightenment? such as Immanuel Kant and Wilhelm von Humboldt and later contemporary linguists ? including Edward Sapir and Benjamin Lee Whorf - put forward theories and hypotheses which argue whether or not thought can exist without language. Even after 400 years the question is still a subject of debate as it were, and commandeers attention from specialists across many fields. More recently (1988) the psychologist Lawrence Weiskrantz wrote ?Thought Without Language? which draws on notions of past thinkers and also contributed concepts which have been popular in Western society. ...read more.

Image theory is the idea that the meaning of a word is defined by the image it conjures in the mind. This idea proposes that thought can exist absolutely before and without language. Some argue that human beings think in images, this could explain why we are often faced with the predicament of not being able to communicate effectively what we are thinking. If our thoughts exist as images we do not need language to know and understand these words. For example, in the Inuit community there are many words for different kinds of snow - aput ?snow on the ground', gana 'falling snow', piqsirpoq 'drifting snow', and qimuqsuq ? a snow drift? ? The images that the different words conjure can exist without the words themselves, and the images do not change because of the word but rather the word changes because of the image. ...read more.

This could be owing to the fact that Yoruba is a language rife with proverbs and puns and speakers of it are accustomed to thinking on the subject matter what is said. Therefore proving that the style of the Yoruba language limits what speakers interpret and therefore what they think and know. I personally believe that a limited amount of thought can exist without language. It is not necessary to consult and communicate with other human being about our thoughts on simplicities. However how would we know the abstract concepts without language? How would we think of love and woe? The lack of language can limit our experience and thought thereof. Thought can exist without language, but language enriches thought and is therefore an integral part in developing the human mind. ...read more.