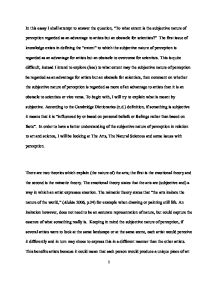 To what extent is the subjective nature of perception regarded as an advantage to artists but an obstacle for scientists?

One reason for why people might interpret art in a different way than others or from the way artist meant for it to be understood, is that people come from different cultures and have inherited different prejudices. Inherited prejudices and the culture that a person grows up around affect the way he or she perceives the world. For example; I remember reading (a fictional) a book by Louis Lowry entitled "The Giver". In the book the people of the community know nothing of the way past generations had lived before their community existed. All of the people in the community cannot see color, they do not feel in-depth emotions and essentially their lives have been set out for them. Thus, the people of the community perceive the world around them in the same way. The main character "Jonas" is chosen to hold the memories and history of the past generations. Jonas is then able to see colors and feel in-depth emotions. This causes him to see things differently from the way he once did. When he saw children playing a game that -he used to play as a child and- he once thought was mere innocent child's play, he realized -with the aid of his newly acquired knowledge- that it was a terrible game of war. ...read more.

That would mean that there is no optimal answer; so of what importance would the literature value be? Galileo Galilei said, "In questions of science the authority of a thousand is not worth the humble reasoning of a single individual" (n.d., cited in Theory of Knowledge: IB Diploma Programme, 2006). This seems to suggest a reference to Galileo Galilei's discovery that the earth is not the center of the universe. At the time many figures of authority believed that the earth is the center of the universe but that does not necessarily mean that it is true. After exploring the two areas of knowledge -The Arts and The Natural Sciences- and some of the issues with perception I have come up with a comment about my question. I believe that the extent to which the subjective nature of perception is regarded as more of a benefit to artists than an obstacle to overcome for scientists. However, I have assumed that the Sciences that are referred to in my essay question are the Natural Sciences. This is a limitation in my essay, as the sciences referred to in the question could be the Natural Sciences or the Social Sciences. Still, people in general seem to refer to the Natural Sciences when using the word; Sciences. ...read more.