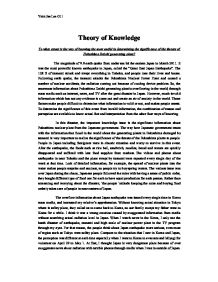 To what extent is the way of knowing the most useful in determining the significance of the threats of Fukushima Daichi generating plant?

Theory of Knowledge To what extent is the way of knowing the most useful in determining the significance of the threats of Fukushima Daichi generating plant? The magnitude of 9.0 earth quake from under sea hit the eastern Japan in March 2011. It was the most powerful known earthquake in Japan, called the "Great East Japan Earthquake". The 128 ft of tsunami struck and swept everything in Tohoku, and people lose their lives and house. Following earth quake, the tsunami attacks the Fukushima Nuclear Power Plant and caused a number of nuclear accidents, the radiation coming out because of cooling device problem. So, the enormous information about Fukushima Daichi generating plant is overflowing in the world, through mass media such as internet, news, and TV after the great disaster in Japan. However, much invalid information which has not any evidence is come out and create an air of anxiety in the world. Those factors make people difficult to determine what information is valid or not, and makes people unrest. To determine the significance of this event from invalid information, the combination of reason and perception are available to know actual fact and interpretation from the other four ways of knowing. ...read more.

When I watch news in the Korea, I only see the harsh disaster of earthquake, tsunami and high scale of nuclear power plant in the TV program through my eyes. For that reason, the people think about Japan earthquake more serious, even most of region such as Tokyo were safety place. Compare to the situation that I saw in Korea and Japan, the perception was different at each time especially when I went to Korea to evacuate and Miyagi for volunteer on April 29 to May 1. At first, I thought Japan is very dangerous place because of over exaggerates news about radiation with terrible photos through media when I was in outside of Japan. However, I realized all place of Japan was not that terrible compare to the information from the news. For example, a main city such as Tokyo is getting back to normal life. The news about the radiation of Fukushima nuclear plant was exaggerated or mistranslated in outside of Japan. There are many languages are used in the world with different grammar, vocabularies, accent, etc. For that reason, there had problem of translation from one country to another country. ...read more.

It said the radiation after the disaster is coming to Korea, and recommend people to buy mask, umbrella, or take a shower. Also, the rumor becomes more exaggerated and said that it is similar with the Chernobyl disaster, the most terrible nuclear disaster in the world. Most of the people believed this rumor even there was not came from the actual media because of less information from the government and limit time to figure out the real situation. Likewise, most of negative emotions make people to lose self-control, because of strong emotion and make them to do wrong decision in a moment. To get attention from people, most of the media broadcasting over exaggerated information about Fukushima nuclear plant to people, and creates the chaotic mood which disturbs people to determine the true. From the over flood information, people disturbing with the terrible news about Japan and precarious life in Japan. Therefore, people should be careful from that information with knowing or experiencing the actual fact of the event such as earthquake and nuclear plant problem in Japan. In addition, the reason and perception is most useful way of knowing to determine the significant of the threats of Fukushima Daichi generating plant from the over exaggerated information with having wide view. ...read more.