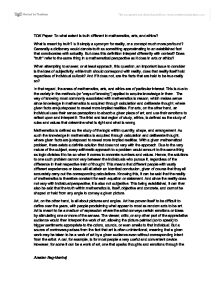 To what extent is truth different in mathematics, arts, and ethics?

TOK Paper: To what extent is truth different in mathematics, arts, and ethics? What is meant by truth? Is it simply a synonym for reality, or a concept much more profound? Generally a dictionary would denote truth as something approximating to an established fact that corroborates with actuality. But does this definition interpret differently with context? Does "truth" refer to the same thing in a mathematical perspective as it does in arts or ethics? When attempting to answer, or at least approach, this question, an important issue to consider is the idea of subjectivity; while truth should correspond with reality, does that reality itself hold regardless of individual outlook? And if it does not, are the facts that are held to be true really so? In that regard, the areas of mathematics, arts, and ethics are of particular interest. This is due to the variety in the methods (or "ways of knowing") applied to acquire knowledge in them. The way of knowing most commonly associated with mathematics is reason, which makes sense since knowledge in mathematics is acquired through calculation and deliberate thought, where given facts are juxtaposed to reveal more implied realities. ...read more.

of the artist. Hence, a single piece of art has as many potential interpretations as it does critics, making its reality highly subjective. Thus the truth pertaining to a piece of art can also differ from individual to individual. However the intent of the artist cannot be denied as the purpose of a creation is determined by the creator himself; how well it does in that end is then dependent on the perspective, or taste, of the audience. But the aforementioned point about subjectivity would imply that it is virtually impossible for the artist's intent to match the critique - a problem that is somewhat extinguished by the establishment of styles within various forms of art. These styles are basically systematic forms of bias that act somewhat as a "language" for a particular work of art: different styles have different common traditions, such as abstract painting as opposed to a portrait, or modernist as opposed to feminist literature. If a critic knows the style employed by the artist, he or she can then evaluate the use of the principles and the limitations of that style and understand the meaning behind the work, almost like using an accepted mathematical equation to solve a complex problem. ...read more.

It is clear from previous statements that the definition of truth, despite common habits, cannot be taken for granted. It has been established that mathematics as a science consists of concrete, indisputable facts that are realized through reason. The logically grounded nature of math ensures that all truths in it are objective and cannot differ with perspective as there is simple no room for bias. Truth in arts, on the other hand, is highly dependent on the sensory intake and the emotional reasoning of the artist and, to lesser extent, that of the audience. The ambiguous nature of art results in a correspondingly vague definition of truth as there are no concrete facts available for corroboration. Moral values hand found themselves to vary from culture to culture, from continent to continent, with various communities having dramatically different ideas with respect to right and wrong. This leads to the truth in ethics being highly but not completely subjective so as most cultures agree on the atrocious nature of murder and the immeasurable value of a human life. Taking these factors into consideration, it can be concluded that truth does indeed largely differ between the areas of mathematics, arts, and ethics. ?? ?? ?? ?? Arsalan Beg-Menhaj ...read more.