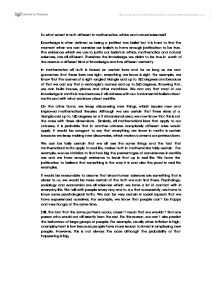 To what extent is truth different in mathematics, ethics and natural sciences?

To what extent is truth different in mathematics, ethics and natural sciences? Knowledge is often defined as being a justified true belief but it is hard to find the moment when we can consider our beliefs to have enough justification to be true. The evidence which we use to justify our beliefs in ethics, mathematics and natural sciences, are all different. Therefore the knowledge we claim to be true in each of the areas is a different kind of knowledge and has different certainty. In mathematics all truth is based on certain laws and for as long as we can guarantee that these laws are right, everything we know is right. For example, we know that the corners of a right-angled triangle add up to 180 degrees and because of that we can say that a rectangle's corners add up to 360 degrees. Knowing that, we can build houses, planes and other machines. We can say that most of our knowledge in maths is true because it all coheres with our fundamental beliefs about maths and with what we know about real life. On the other hand, we keep discovering new things, which require new and improved mathematical theories. ...read more.

For example, usually when inflation is high, unemployment is low because people have more reason to invest in employing new people. However, this is not always the case although the probability of that happening is big. There are areas in social sciences which can't be summarized by certain laws of behaviour. For example, we can't say that we know that most people will pick cherry-flavoured ice-cream instead of a chocolate one because we don't have enough justification to think that. If we made a survey amongst thousands of people and all of them would prefer cherry ice-cream, we would have reason to believe that there is a reason behind the preferences of all people, but we can't make that a universal law until we know what the justification behind the tendency is. One could say that truth in ethics could also be found by analysing the behaviour of large groups of people. It would be sensible to think that if something would be ethically right, it is considered to be ethically right with a large group of people because all these people can't be wrong. ...read more.

Still, time has shown that over time, people do agree on certain beliefs. We have other ideas now than we had a century ago because we know about other areas of knowledge. We all agree that we have made some kind of development because if we would know better, we wouldn't act the way we do now. The truth in different areas of knowledge is very different. In maths, all what we know is based on our observation about the world. The reliability of that source is very limited because we know that the area which we are able to explore is very little compared to the complete area to be discovered.. We can be fairly sure that we all perceive the same things in the world but we cannot be certain of the way people think because we have no insight into that matter. Although we can make some very accurate predictions about human behaviour, we do not have a lot of evidence to claim anything about the whole society. Ethical truths can be found by using reason but we can't be certain that all those truths apply to the whole world because our way of thinking is limited and every person has a different way of thinking. ...read more.