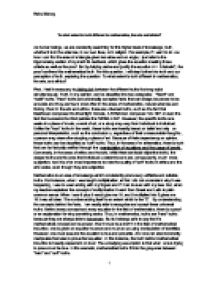 To what extent is truth different in mathematics, the arts and ethics?

To what extent is truth different in mathematics, the arts and ethics? As human beings, we are constantly searching for this higher level of knowledge, truth, whether it is in the sciences, in our own lives, or in religion. For example, if I want to know how I can find the area of a triangle given two sides and an angle, I just refer to the trigonometry section of my math SL textbook, which gives the equation meeting those criteria as well as the proof. But by helping derive and justify the equation A =0.5absinC, the proof confirms this mathematical truth. For this question, I will step further into truth and our perception of truth, exploring the question: To what extent is truth different in mathematics, the arts, and ethics? First, I feel it necessary to distinguish between the different truths that may exist simultaneously. Truth, in my opinion, can be classified into two categories: "hard" and "soft" truths. "Hard" truths are universally-accepted facts that can always be proven to be accurate and they are found most often in the areas of mathematics, natural sciences and history. Even in the arts and ethics, there are universal truths, such as the fact that Beethoven composed the Moonlight Sonata, A.R Rahman composed "JAI HO" or even the fact that Leonardo Da Vinci painted the "MONA LISA". ...read more.

There is a song my artist Mohombi called "In Your Head".Mohombi says his tune for the song is his own composition, but I can argue saying that the same tune is heard in the song "Cranbaries" by Zombie. By using evidence from the music to prove Mohombi mimics that tune, my claim then becomes a personal truth because I have specific evidence. However, I strongly feel such truths in the arts are affected by whom they are justified by. For example, if at an art exhibition, two men are discussing whether the painting is marvellous or not. And if one of them was an experienced art critic whereas the other one was a new art critic .i would take sides of that of the experienced one. Most likely, I would not investigate his claim. But that same trust would not exist for the new critic. Regardless of the validity of their arguments, I would value the "soft" truth the critic holds to a higher level. Just like "hard" truths in mathematics, "softer" truths in the arts encompass, but are more affected by, an element of trust. Since "soft" truths rely on a level of personal interpretation and facts, this subjectivity alters the quality of such a truth. ...read more.

Whenever I use public transportation , I have to abide by this unspoken rule. Without even thinking about it, I just automatically stand up if someone older than my parents gets on the bus. But if I did not stand up, another passenger would and it would make me seem rude. I feel there is almost an ulterior motive behind this truth in order to meet and fulfil societal guidelines. At this point, it is not a consideration of what I should do, but rather what I need to do. Because these guidelines are essentially rules, they ought to be followed and this truth becomes a "hard" truth. It lacks subjectivity because it is now based on rules and guidelines rather than on emotions and feelings. Similar to how mathematical truths do not rely on emotions, there are cases in ethics where truth and emotions become mutually exclusive. In conclusion, truth is interpreted in disparate fashions in mathematics, the arts, and ethics. While mathematics is comprised of "hard" truths, the arts and ethics are almost completely made of "soft" truths. However, different factors affect the quality of these "hard" and "soft" truths, what we use on a daily basis to better understand ourselves and our world. ?? ?? ?? ?? Rahul Manay 1 ...read more.