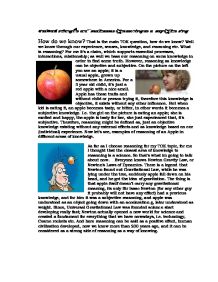 Evaluate strengths and weaknesses of reasoning as a way of knowing How do we know? That is the main TOK question, how do we know? Well we know through our experience, senses, knowledge, and reasoning etc. What is reasoning? For me it's a claim, which supports essential processes, interactions, relationship; as well we base our reasoning on some knowledge in order to find some truth. However, reasoning as knowledge can be objective and subjective. On the picture on the left you see an apple; it is a usual apple, grown up somewhere in America. For a 3 year old child, it's just a red apple with a nice smell. Apple has these traits and without child or person trying it, therefore this knowledge is objective, it exists without any other influence. But when kid is eating it, an apple becomes tasty, or bitter, in other words it becomes a subjective knowledge. I.e. the girl on the picture is eating an apple; she is excited and happy, the apple is tasty for her, she just experienced that, it's subjective. Therefore, reasoning might be defined as, just an objective knowledge existing without any external effects and as knowledge based on our (individual) ...read more.

Before Almaty, was a city full of apple gardens, right now on the place of theses beautiful apple trees we have roads and expensive cottages for rich people. As far as we are a developing country, we have our own economy, different business spheres; it brings more profit to invest in new buildings, rather than into growing trees. If thinking rationally, on one hand true may be selling houses is really profitable, however on the other our cultural descents that brought apples here and made an apple our cultural characteristic is disappearing now. Now apple it's not an object of pride of each citizen of Almaty, now it's a good that can give you a lot of money if you know how to sell it. In the particular situation an apple carries a cultural value, which is subjective according to the history of the city where it was grown up first. On the other hand, an apple is a good which carries an economical characteristic such as price which is more important in this system of values. So that, civilization, development absorbed the cultural values, which I consider as negative effect of reasoning. ...read more.

Intuitively an individual, particularly kid knows that apple is good. Another event is that person who gave an apple for example parent rationally knows that an apple is useful and it has a lot of vitamins inside and it useful for the organism of their own child. Here, reasoning is based on our previous knowledge from books, or biology lessons that apple is a good product. Another thing is that, for example in fairy tales Snowhite and Seven Dwarfs remember an episode when "...The queen masquerades as an old apple seller and attempts to poison Snowhite with an apple..." In general apples are not poisonous, but people who had knowledge before and had some experience, put these traits on the objects. As in this example, here apple became a weapon, though in life it is not, it is even used as good medicine from some illnesses. Hence, my conclusion will be, that objectively reasoning is the way of knowing, which helps to understand one thing (apple) in different contents. Only individual who read, will detect is it strength or weaknesses, he will think subjectively, and base his arguments on his own believes. Interesting, objects have their necessary traits, but we humans determine the effect of this object, and how it will be used. Word Count: 1185 ...read more.