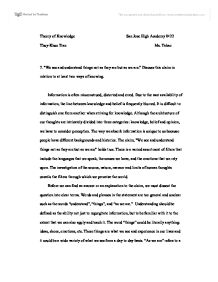 Theory of Knowledge San Jose High Academy 0422 Thuy-Khue Tran Ms. Takao 7. "We see and understand things not as they are but as we are." Discuss this claim in relation to at least two ways of knowing. Information is often misconstrued, distorted and erred. Due to the vast availability of information, the line between knowledge and belief is frequently blurred. It is difficult to distinguish one from another when striving for knowledge. Although the architecture of our thoughts are intricately divided into three categories: knowledge, belief and opinion, we have to consider perception. The way we absorb information is unique to us because people have different backgrounds and histories. The claim, "We see and understand things not as they are but as we are" holds true. There is a varied assortment of filters that include the languages that we speak, the senses we have, and the emotions that we rely upon. The investigation of the source, nature, manner and limits of human thoughts unveils the filters through which we perceive the world. Before we can find an answer or an explanation to the claim, we must dissect the question into clear terms. ...read more.

In recent times, mass media is the main provider for the news. They have covered most memorable and important stories but they do it with a "media bias." Behind their words lies a tone of persuasion; they hope to influence us in one direction or another. Since the early days of the newspaper, there have been racial, political, and class bias. Hitler bombarded his public with news of "immoral Jews" during World War II (Weikart 158). The constant persuasion in the newspaper led the people to believe his words as truth. The media brainwashed them into believing the fictional stories. Although this is an extreme example in history, journalism bias still exists in our current news. As a result we can see "things" not as they are, but we can see things how others view them. Other people can influence our thoughts and beliefs with their opinions. Like World War II, politicians today use propaganda to persuade and sway the public. People rely on the news as a source of information, but some do not realize that through the communication of facts and data, there also is also a transfer of bias. ...read more.

In the case of the observer effect, the presence of an observer may make people nervous or embarrassed by his or her attention and this may lead them to change their behavior (Lagemaat 261). The purpose of human sciences is to dissect why and how humans think and feel. Humans are born unbiased and blank as a slate-- a shell without beliefs or opinions. As humans age and grow, they become biased with the accumulation of knowledge. However, human sciences do not have a method in predicting the trends in human behavior because each individual has different experiences, backgrounds and religions. The languages that we speak, the senses we have, the culture we belong to, and the emotions that we rely upon play essential roles in people's understanding of "how things really are." An individual must recognize the existence of these filters in order to identify reality which leads to the removal or altercation of the filter. Reflection, analysis, education play important roles in the process of the way we analyze and react to external and internal conflicts. People need to break apart the mechanics of perception and interpretation so they can see past the factors that block them from the pursuit of knowledge. ...read more.