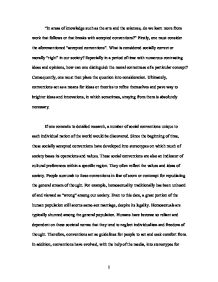 "In areas of knowledge such as the arts and the sciences, do we learn more from work that follows or that breaks with accepted conventions?" Firstly, one must consider the aforementioned "accepted conventions". What is considered socially correct or morally "right" in our society? Especially in a period of time with numerous contrasting ideas and opinions, how can one distinguish the moral correctness of a particular concept? Consequently, one must then place the question into consideration. Ultimately, conventions act as a means for ideas or theories to refine themselves and pave way to brighter ideas and innovations, in which sometimes, straying from them is absolutely necessary. If one commits to detailed research, a number of social conventions unique to each individual nation of the world would be discovered. Since the beginning of time, these socially accepted conventions have developed into stereotypes on which much of society bases its operations and values. These social conventions are also an indicator of cultural preferences within a specific region. They often reflect the values and ideas of society. People succumb to these conventions in fear of scorn or contempt for repudiating the general stream of thought. For example, homosexuality traditionally has been unheard of and viewed as "wrong" among our society. ...read more.

By following these conventions, one can follow the path anticipated and discover for himself whether this path is "right" or "wrong". In other words, working accordingly to conventional methods provides a chance for one to seek truth for himself and challenge what is considered to be true in society. This ultimately is an ideal process of learning, for one can obtain first-hand experience and know in the future which path to follow. By challenging what is considered to be correct, one can develop and practice individualism, sprouting to unparalleled creativity and unique ideas difficult to muster through other techniques of learning. Eventually, constituted from this individual rationality, one will learn to express himself more optimally, which is a milestone in the Arts, an Area of Knowledge. By challenging the very threads of our society, one will develop the nature and tendency to ask questions and challenge what he is being told. Society has adopted these conventions and perused them to such an extent that any individual who defies this definition of "normal" is instantly rendered an "outsider", so to speak. As the existentialist novel The Outsider by Albert Camus and The Metamorphosis by Franz Kafka points out, so long as one does not fit in the description of the norm, he will be alienated from society. ...read more.

By comparing these ideas with the ideas with those who research through conventional methods, one can also determine for himself which is "right" and which is "wrong". Thinking "outside the box" is especially effective and necessary in the Sciences, for history has proven that those with the innovation and shockingly different concepts and theories are the most scientifically correct and renowned. If all scientists or all artists followed the same method or ideas, human development would be caught in a loop, never progressing. All artwork would suffer from dull repetition, as artists would fail to capture life through their own eyes. New ideas and discoveries are made on a daily basis because scientists choose to reject these accepted views. This is the very reason why breaking apart from accepted conventions is necessary for learning and development. In conclusion, accepted conventions act as medium for the human population to learn from. Although they may constitute the ways of thinking and how to act in a society, they are at the same time, ideal learning tools that if used correctly, will aid in human development individually as well as a whole. This application is ideal to all Areas of Knowledge, for individualism and thirst for "truth" is central to all knowledge. Choosing to break apart from accepted conventions will ultimately allow one to consider his choices and recreate the meaning of "truth" for himself. Words: 1356 ?? ?? ?? ?? 1 ...read more.