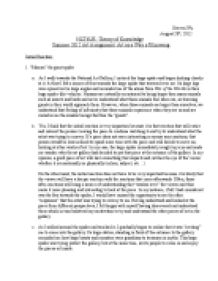 Tok Art Assignment: My reactions on visiting the Art Gallery

﻿Steven Wu August 28th, 2012 HZT4UE: Theory of Knowledge Summer 2012 Art Assignment: Art as a Way of Knowing Initial Reaction: 1. ?Maman? the giant spider 1. As I walk towards the National Art Gallery, I noticed the large spider and began looking closely at it. At first I felt a source of fear towards the large spider that towered over me. Its large legs were spread out in large angles and reminded me of the aliens from War of the Worlds in their huge spider-like vehicles. Humans are naturally accustomed to being larger than many animals such as insects and birds and never understand what those animals feel when we, as towering giants in their world approach them. However, when those animals are larger than ourselves, we understand that feeling of inferiority that these animals experience when they see us and see ourselves as the smaller beings that fear the ?giants?. 1. Yes, I think that the initial reaction is very important, because it is that reaction that will entice and interest the person viewing the piece to continue watching it and try to understand what the artist was trying to convey. If a piece does not seem interesting or arouse any emotions, that person would be less inclined to spend more time with the piece and will decide to move on, looking at other works of art. In my case, the large spider immediately caught my eye and made me wonder why the art gallery had decided to put that piece at the entrance of the gallery. In my opinion, a good piece of art will have something that impacts and catches the eye of the viewer whether it is emotionally or physically (colour, subject, etc?). On the other hand, the initial reaction does not have to be very important because it is likely that the viewer will have a deeper reaction with the reactions that come afterwards. ...read more.

6. 1. I believe it has a rightful place in the gallery. Architecture is the design of buildings including structure, exterior design and interior decorations. These being all aspects that manipulated to human appeal make architecture a form of art. The structure was most likely intended to be a part of the gallery for its artistic merit from a structural point of view. The inner architecture of the Chapel (e.g.: ceiling) can be judged as a piece of art. It not only embodies an architectural significance but also a historical significance in Canada. Also included within the Chapel are statues and altars which can also be classified as art. On the other hand, one can argue that architecture is limited to physics; certain designs are unable to become realistic structures simply because of natural forces (e.g.: gravity). Art is not limited to anything but materialistic issues and human imagination. Also, it relates very little to other pieces of arts in the gallery except the few that have religious purposes/meanings. The Chapel would be better off in a gallery for religious art. 1. I believe that buildings should be appealing to the public that pass by the building in order to be known as ?good architecture?. The concept of ?appealing? can be flexible and differ for different types of buildings. Architecture should be based on the type of public it intends to attract but should not defeat its fundamental purpose ? existing as a strong and stable structure able to protect humans from the elements. 1. Many buildings in Ottawa can be considered good art, in the form of architecture. Lisgar Collegiate Institute is a building I consider to be good architecture. Being Ottawa?s oldest high school, its architecture is a good example of old architecture in the city. It has lasted through Canada?s history from the late 1800?s and its main structure has never had to be completely refurbished which suggests the materials used to build it were meant to last a very long time. ...read more.

People generally get satisfaction in viewing ?good? art can usually only be fulfilled by viewing those pieces of art created by ?experts? in art. However, one can argue that an artist?s fame and reputation is not important as long as their work inspires an emotion within the viewer. Their fame and reputation does not directly affect the artist?s work; what really matters is the uniqueness of the work. 1. Whether or not an artist becomes famous or recognized in their lifetime matters very little. Many famous artists went unrecognized in their careers until many years later. Many pieces of art in the Gallery are by artists who are usually not well known by the public but still get admired and commented on. I feel that recognition is a product that comes with successful art. It will not directly affect the work of the artist but will certainly boost his or her mentality on creating new works. The change in art would be more attributed to the artist?s imagination and thoughts which are affected by personal experiences. However, recognition arguably can cause the artist to create only works that appeal to viewers and not ones that the artist wants to create. Commercialisation of the pieces, in particular, can cause this effect in the artist in their effort to remain recognized. 10. I would prefer it to be displayed during peak hours of the Gallery where the highest number of people would see it. In the portrait, I would be laid-back, smiling while sitting comfortably on a sofa. It would be very large and have its own section to emphasize ?my importance? and gain the awe and admiration of all the viewers. However on the other hand, I would also like it if it was put further into the Gallery where only dedicated art enthusiasts would be able to marvel and admire my portrait. There would be nothing fancy, just a medium sized portrait in the corner of the section so as to increase the interest and curiosity in the viewer when they found my portrait. ...read more.