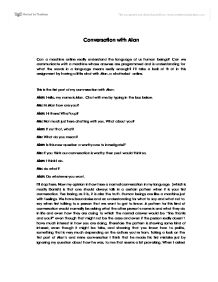 Conversation with Alan Can a machine online really understand the language of us human beings? Can we communicate with a machine whose answers are programmed and is understanding for what the words in a language means really enough? I'll take a look at that in this assignment by having a little chat with Alan, a chatterbot online. This is the first part of my conversation with Alan: Alan: Hello, my name is Alan. Chat with me by typing in the box below. Me: Hi Alan how are you? Alan: Hi there! What's up? Me: Not much just here chatting with you. What about you? Alan: If not that, what? Me: What do you mean? ...read more.

even though that might not be the case and even if the person really doesn't have much interest in how you are doing. Therefore the pattern is showing some kind of interest, even though it might be fake, and showing that you know how to polite, something that is very much depending on the culture you're from. Taking a look on the first part of Alan's and mine conversation I think that he made his first mistake just by ignoring my question about how he was, to me that seems a bit provoking. When I asked him "what do you mean?" he just simply answered with a question that I consider to be a bit negative even though my question to him wasn't intended to be seen upon as negative. ...read more.

Alan: frustration. Me: Why are you frustrated? Alan: I have such a big devotion to duty. At the beginning of this conversation I was expecting that Alan would say that he didn't have any emotions because he is a machine but for some reason he says he does. These answers are obviously programmed as said in the beginning and he just reacts on certain words and he says that he has a great deal of emotions but really he doesn't because if he did he would know that hate is an emotion and not lack of it. Of course this is not his own opinion but the opinion that the one who programmed him wants him to have. Therefore he doesn't understand the meaning of a language because a language is more than just putting words into a sentence, it is about understanding the person who you are talking to. ?? ?? ?? ?? ...read more.