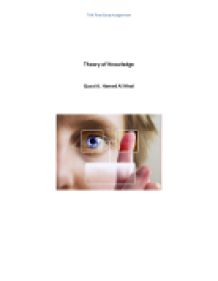 TOK. Consider the extent to which complete certainty might be achievable in mathematics and at least one other area of knowledge.

﻿TOK Final Essay Assignment Theory of Knowledge Qusai A. Hamed Al Hinai ________________ Mathematicians have the concept of rigorous proof, which leads to knowing something with complete certainty. Consider the extent to which complete certainty might be achievable in mathematics and at least one other area of knowledge. In Theory of Knowledge, the course divides into two core subjects which are the Ways of Knowing and Areas of Knowing. Based on the title, there is an extent to which the areas and ways of knowledge may elucidate the question. The title discusses the concept of mathematical rigorous proof which involves the process of uncertainties and contradictions, if none are available then the proof exists on complete certainty. The question, in this case, is, are proofs completely certain and reliable to act as a general statement? Aren?t proofs based on a structure of logic and rely on a certain depth of axiom? All proofs in mathematics have a range of fundamental laws which are based on known axioms. Expressions which are false and considered to be true, then used as the main subject of logic such as mathematics, are the reasons that prevent proofs from being absolutely certain. A number of mathematicians claim that axioms are self-evident and that the truth behind them can be recognized, understood and reflected upon. ...read more.

Has he/she been taught by authority such as us to accept the values of math and apply it as if it is applicable to every situation? Does he/she have complete certainty of what he is teaching correct or is he/she is teaching it because he knows the subject blindfolded? As Charles Darwin said ?A mathematician is a blind man in a dark room looking for a black cat which isn?t there.? Certainty is based on a person?s strength of belief and ability to show reasoning with his/her word. As you can see in TOK, the requirements of a good TOK essay is that you can support your belief by proof and belief by opinions and backed up with facts to show your understanding and certainty of the topic. Similarly related, is the concept of certainty about the existence of God. Is it mainly based on belief or proof, or theory, or even logic? Or is it a mutual feeling between all of them? Using the concept of axioms, if all of the theories were assumed to be true, and taught to others, and found out that at least one was false, wouldn?t it make all of assumptions of the world and the creation wrong( if each assumption was linked together)? ...read more.

That is why when you go to a doctor in any department (medicine, psychology, and etc.), their answer most of the times is ?I believe or I think or I assume that.? That is because most of the time they don?t have a certain answer because of the fact that all of the research is based on predictions and uncertainty. Thus, the concept of achieving a complete level of certainty to reach the absolute truth is theoretically possible. Even though in reality this may be never achieved, we must always keep in mind that the theoretical absolute truth is relatively different from the actual truth, as it is set up to satisfy the conditions of the universe that we cannot perceive. The main reason why we humans take absolute in a theoretical situation is because we cannot be certain of anything. Our senses fool us into making us think that it simply doesn?t matter. We don?t have the power to know the difference between the actual and theoretical truth, and there is no way to find the actual absolute truth, so we ignore it. In life there are obstacles that a human mind may not pass through to search for absolute truth. There is a way to find the truth behind these barriers, but only to the extent of our mind?s limits. ...read more.