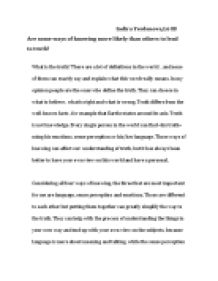 ï»¿Indira Yerdenova,L6 IB Are some ways of knowing more likely than others to lead to truth? What is the truth? There are a lot of definitions in the world , and none of them can exactly say and explain what this word really means. In my opinion people are the ones who define the truth. They can choose in what to believe, what is right and what is wrong. Truth differs from the well-known facts , for example that Earth rotates around its axis. Truth is not knowledge. Every single person in the world can find «his truth» using his emotions. sense perception or his/her language. Those ways of knowing can affect our understanding of truth, but it has always been better to have your own view on this world and have a personal. Considering all four ways of knowing, the three that are most important for me are language, sense perception and emotions. ...read more.

This is an example of determining the truth. Body language is another side of justifying the truth. For instance, psychologists operate with body language in their practice to make patients feel comfortable and to believe them by using the same poses, similar gestures and the eye contact. This process could work the other way round. I often exercise this one to find out whether the person I am talking to is telling the truth or not. For example I was facing a lot of situations in my life when people tried to avoid the gaze or started to mumble. My immediate response to the behaviour like that is very suspicious. Than I am starting to realize that the person is lying to me. However, it does not always work. Some people that I have met in my life were able to defend from this method. In such cases the sense perception is quite useful. ...read more.

I care too much. Sometimes that causing me problems. I used to have a friend. She was nice and kind when we first met, so I wanted to get to know her. But there were a rumours that she was a selfish girl, who can easily betrayed her friends. I can not even imagine that might be true. But it was. The rest off the story has a sad ending, but it was the lesson for me. Since then I try not to let my feelings or emotions to lead me to the wrong way. Finishing to write my essay I came to the conclusion that truth can be everything that surrounds me. I and only I decide whether to believe in what I say, what I see and what I feel. I have my own ways in justifying the truth, and of course , my opinion can be different from the others . For example some people believe what reasoning is the only one right way to lead to truth. No need to argue with that. I know ,what I believe. That is my power. ...read more.