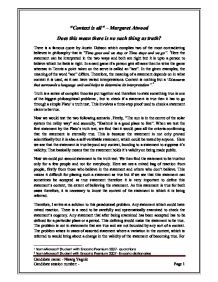 "Context is all" - Margaret Atwood Does this mean there is no such thing as truth? There is a famous quote by Austin Dobson which complies two of the most contradicting believes in philosophy that is "Time goes and we stay or Time stays and we go". 1Here the statement can be interpreted in the two ways and both are right but it is upto a person to believe which he feels is right. In a card game if a person gets all aces then he wins the game whereas in Tennis a point taken on the serve is called an "ace". In the given examples, the meaning of the word "ace" differs. Therefore, the meaning of a statement depends on in what context it is used, as it can have varied interpretations. Context is nothing but a "Discourse that surrounds a language unit and helps to determine its interpretation".2 Truth is a series of complex theories put together and therefore to state something true is one of the biggest philosophical problems , but to check if a statement is true then it has to go through a simple Plato' s truth test. ...read more.

As there is a famous quote by Charles Peirce that "Truth is that to which the community ultimately settles down" 3which actually means that a widely accepted statement is considered to be true even if it were false and other opinions are not accepted on this view. For example the superstious belief of the 15th-16th century which were accepted blindly and nothing was allowed to oppose it like the very false considered belief of the earth being the centre of the solar system and when Galileo opposed it he was punished. This sort of an extreme situation arose because of it being told in the bible about the sun's position which was believed blindly. This shows us as to how a true statement is considered false just because of a context. Here we see as to how context sometimes overpowers the justification of the statement. Although there is something that I term as "Context of time" which is nothing but the advancements in technology and other sectors that affect the statement's valediction like the example of the earth being the centre of the universe which was accepted earlier but was later proved false scientifically. ...read more.

Many a time statements are true for only a particular reference which means that the context in those statement is all that draws the line between it's acceptance as truth and it's rejection. 'Change is a changeless law' this statement is a very paradoxical statement as we know that change is inevitable but this can't be applied to this statement as it would stand as an exception. Taking another example 'space is indestructible' this statement is also true as space can never be destroyed but on the other hand we know that there are philosophical believes of spaces curves which would mean that the universe too has a shape and therefore it has a beginning. There is also another philosophical belief that everything that has a beginning has an end and therefore these statements to be true have to be defined in a particular context or a frame of reference. I therefore believe that the statement "context is all" doesn't support the proposition that there is something called truth that is absolute and beyond any frame of reference known to the human knowledge of the universe and therefore it doesn't pass the second criteria of Plato's test of a true justified belief. ...read more.