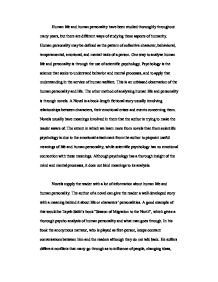 Human life and human personality have been studied thoroughly throughout many years, but there are different ways of studying these aspects of humanity. Human personality may be defined as the pattern of collective character, behavioral, temperamental, emotional, and mental traits of a person. One way to analyze human life and personality is through the use of scientific psychology. Psychology is the science that seeks to understand behavior and mental processes, and to apply that understanding in the service of human welfare. This is an unbiased observation of the human personality and life. The other method of analyzing human life and personality is through novels. A Novel is a book-length fictional story usually involving relationships between characters, their emotional crises and events concerning them. Novels usually have meanings involved in them that the author is trying to make the reader aware of. The extent in which we learn more from novels than from scientific psychology is due to the emotional attachment from the author to pinpoint useful meanings of life and human personality, while scientific psychology has no emotional connection with these meanings. Although psychology has a thorough insight of the mind and mental processes, it does not bind meanings to its analysis.

Novels supply the reader with a lot of information about human life and human personality. The author of a novel can give the reader a well developed story with a meaning behind it about life or characters’ personalities. A good example of this would be Tayeb Salih’s book “Season of Migration to the North”, which gives a thorough psycho analysis of human personality and what man goes through. In his book the anonymous narrator, who is played as first-person, keeps constant conversations between him and the readers although they do not talk back. He suffers different conflicts that many go through as to influence of people, changing ideas, personality changes, etc. This is meant to show how people learn more about life through novels as they give examples, although expressed through fiction. These examples, although fictional, are meant to captivate the reader as he can relate to them. Usually the meanings are revealed throughout the novel, as they bind to the storyline and the author’s intentions are subtly placed and flow well throughout the novel. In Tayeb Salih’s novel, the narrator experiences many life changing events and meets an influential figure, Mustafa, that changed his life views of living a peaceful life. At a point in the novel, his mind leads him to anger and rage, after the woman he fell in love with committed suicide. These are all characteristics that represent human personality, which most readers would understand when they read it. Another novel that shows aspects of human life is Naguib Mahfouz’s “Midaq Alley”. The meanings of life are expressed through one character, Sheikh Darwish, which most people say could be the author’s direct words. His ideas are directly associated to the author, for example his quote at the end of the book “O Lady of Laides, O Fulfiller of all needs…mercy…mercy, O People of the House! I will be patient so long as I live, for do not all things have their end? Oh yes, everything comes to its nihaya. And the word for this in English is ‘end’ and it is spelled e-n-d…” (Page 286) He shows at the end of the novel that all human life ends and that all human at one time would ask for mercy, its human nature. It is a direct showing of how a person would learn more from novels than through a psychological unbiased analysis.

In psychological analysis, a psychologist uses many observations of individuals to determine what is going through a person’s mind. There is a specific type of psychology called personality psychology. It is the pattern of collective character, behavioral, temperamental, emotional, and mental traits of a person. This shows a developed analysis into a person’s mind through his actions and how he acts on occasions. Usually psychology would select a random sample of a population to observe and study. In this sample, there is no life experience involved, it is complete and plain information given. With all the information acquired, the psychologist would then analyze it and try to gather theories of human life and human personality. These theories would help solve psychological issues that affect humans. Psychologists usually hold a neutral stance about most topics and would not give an opinion that would influence the decision of the patient. Since a population has many different opinions, the study of a few randomly selected patients would not cover the whole population and the analysis, therefore, would be ineffective. Much personal experience is bound to an author; this is why he writes novels. With the experience an author has gone through, he shares his thoughts about human life and personality to his readers. In psychology, on the other hand, no previous experience is needed about human personality; just pure research of the subject. Without experiencing life itself, a proper conclusion about it cannot be reached. In this sense, psychology is in a disadvantage to a novel. A novelist jots down his ideas of certain aspects of life and writes a flow of ideas in the form of a fictional book. In this way, the readers would easily acknowledge the meanings to the novel itself. It is much easier to understand a novel as it relates to the reader, than observations and documents based completely on psychoanalyses of different patients. These documents would only assist in forming different theories of the human mind or personality for a certain population. The information could be only based in certain countries, race, state, town or continent, but it would not cover the whole world’s opinions. Novels, though, are books. Books are usually distributed globally and could captivate the entire world. This would lead to the message about human personality that the author is trying to reveal, to be available for a whole population to be able to read. In a psychological analysis, the information would only affect the population studied and not the globe.

On the other hand, novels could be a pure opinion of the writer himself and does not share the same view as the whole population. This could lead to an improper analysis of human personality. While psychology, the information although retrieved from a certain population, has a relatively small chance of being incorrect information as thorough analysis is used. This would lead to psychology being more efficient to learn from than a novel. To oppose this view, the probabilities of having a novel that leads to an incorrect view about human life and personality is very rare and the novelist would not have experience enough to write a proper novel.

It can be concluded that novels are more effective in sending the message out for the analysis of human life and personality rather than a psychological analysis of a subject. In a novel, we are bound to find a vast amount of experience from the author about human life, as was expressed through Sheikh Darwish in “Midaq Alley” or about human personality, as was shown by the anonymous narrator of “Season of Migration to the North” while in a psychoanalytical document, we are only bound to find information that would come with no experience but just pure research. It is known that the population’s ideas are ever-changing as so are the human personalities; thus lacking experience would lead to not being able to determine the next step that the personality might lead to.