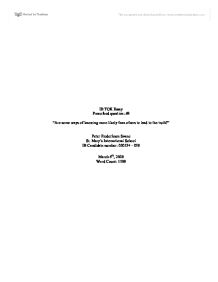 IB TOK Essay Prescribed question: #8 "Are some ways of knowing more likely than others to lead to the truth?" Peter Frederiksen Svane St. Mary's International School IB Candidate number: 000134 - 039 March 6th, 2008 Word Count: 1599 A man, Peter, gets home from a strenuous day of work, and walks upstairs to the bedroom to see if his wife is fine. The door, however, is closed, and Peter hears strange noises. Could it really be the truth that she is unfaithful? Peter is confronted with a dilemma.1 Peter pauses, and his emotions take over: "No, she would never do such a thing," he cries to himself. On the other hand, he reasons out that his wife always receives secret calls and that people who receives secret calls are unfaithful, therefore she must be unfaithful. Confused, he decides to call a neighbor, and ask him to open the door. A few minutes later, the neighbor arrives and peeks through the door. Peter is taken over by Socrates,2 and demands the truth: "There is another man." In denial, Peter tears the door open but only sees his wife. ...read more.

People therefore took his words as sound. The tragedy entered when Fujiwara claimed the Japanese to be more intelligent than others, after excavating Japanese artifacts made with advanced technology. That, however, was a fraud because Fujiwara had planted the fake artifacts there, and later re-discovered them. Such propositions can lead to an ethnocentric brainwash of people, thus molding their knowledge falsely. If the authority makes an attempt to communicate the truth, the challenge/barrier of language still lurks. Linguistic deterministically speaking, no such problem exists, since thought equals the spoken word, and there observations can be explained 100% clear. Rarely, however, is it valid to conclude upon a universal truth: The neighbor is actually from another language background than Peter. In his country, "no other" is pronounced "another," and in demand of a quick response he spat out the word from his native tongue. Hence the neighbor's proposition should have come out opposite of what Peter understood. Nevertheless, authorities' strength is that it speeds up a process of synthesizing information that otherwise would have taken time. But to keep in mind their fallibility, they have been subject to similar restrictions as we face judging information. ...read more.

9 Whether it is right or not to follow dogmatism is another question that arises, when knowledge reliance goes to such an extreme. 10 This book was written by the Nigerian author, C. Achebe. It is about how inflexible beliefs can bring about the downfall of man. Another knowledge issue. 11 Incas, Moslems, Buddhists, Christians, etc. 12Archaeologist exposed as fraud. BBC News, 2000. 2 Jan. 2008 <http://news.bbc.co.uk/1/hi/world/asia-pacific/1008051.stm>. 13 Serotonin is often used in medicine as an anti-depressant hormone: It makes people look more optimistic at the world. Too much of it, however, is highly toxic...same with emotions and perception. 14 Those parameters are summarized in Richard van de Lagemaat's TOK for the IB Diploma (Lagemaat, Richard. Theory of Knowledge for the IB Diploma. Cambridge: Cambridge University Press, 2005.). They are divided into three theories: The correspondence-, coherence-, and pragmatic theory. 15 From what I have heard, she is planning a surprise birthday party for the man, who is turning 40. 16 At least as far as human intelligence can grasp. Many things are beyond human understanding, which, for me, invokes humility faced with the immense everything. 17 In the end truth is formed by beliefs. ?? ?? ?? ?? 2 ...read more.