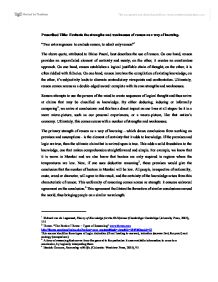 Prescribed Title: Evaluate the strengths and weaknesses of reason as a way of knowing. "Two extravagances: to exclude reason, to admit only reason"1 The above quote, attributed to Blaise Pascal, best describes the use of reason. On one hand, reason provides an unparalleled element of certainty and surety; on the other, it creates an emotionless approach. On one hand, reason establishes a logical justifiable chain of thought; on the other, it is often riddled with fallacies. On one hand, reason involves the compilation of existing knowledge; on the other, it's subjectivity leads to alternate contradictory viewpoints and confrontation. Ultimately, reason comes across as a double-edged sword: complete with its own strengths and weaknesses. Reason attempts to use the powers of the mind to create sequences of logical thought and thus arrive at claims that may be classified as knowledge. By either deducing, inducing or informally comparing2, we arrive at conclusions: and this has a direct impact on our lives at all stages: be it in a more micro-picture, such as our personal experiences, or a macro-picture, like that nation's economy. Ultimately, this comes across with a number of strengths and weaknesses. The primary strength of reason as a way of knowing - which draws conclusions from working on premises and assumptions - is the element of certainty that it adds to knowledge. ...read more.

Industries and firms would look to combat the decreased demand by laying off workers - and they would justify this through a clear economic reasoning: cutting jobs would cut costs and thus, cut losses7. On the other hand, if one uses ethical reasoning, the workers' viewpoints would be acceptable: a job brings with it social and economic stability, and losing one would be disastrous for not just the worker, but also his family. In this way, one sees that although reason retains elements of logic, this logic varies according to the situation and individual, making it personalized. This acts as a strength: it ensures that the individual is able to utilize reason according to personal situation, and arrive at a personally favourable conclusion8. And yet, reason is not supreme. Like most things, it too has negatives. First and foremost is the possibility that the premise it is based on is wrong. As has already been established, reason is developed through premises, and if the premise is wrong, it is equivalent to cutting off the root of a tree: all knowledge gained by reasoning falls flat. For example, there was a time when John Dalton formed his atomic theory using the information available to him through experiments. ...read more.

To elaborate on this, I have to refer to the ancient Indian epic Mahabharata15. In the epic, the villainous Duryodhana won a gambling match against his cousins, and as per the rules set forth, reasoned that it would be suitable to send them for a 14-year exile period. Using this example, we see that it is definitely justifiable if merely reason is used in the deduction process. However, the fact remains that this comes across as a heartless and cruel act, one that is often condemned and can only be countered through use of emotion. In this way, it is often necessary to maintain a balance with other ways of knowing to eliminate these weaknesses of reason. Reason definitely develops consistent beliefs, which provide several strengths to its nature. Furthermore, these justified true beliefs are the basis of rational languages, adding a sense of logic and clarity to thoughts. However, it has various doubts shrouded over its use as a way of knowing, resulting in a variety of weaknesses. Hence, it is ideal if balanced by other ways of knowing. For example, as the philosopher Edward De Bono said, reason may be a 'prison of consistency16', and needs to be merged with other ways of knowing. Reason is an excellent way of knowing, but it falls desperately short when not used with the others. ...read more.