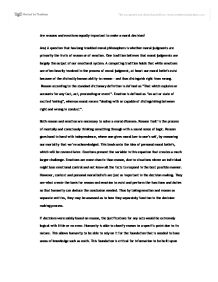 Are reasons and emotions equally important to make a moral decision? Ans) A question that has long troubled moral philosophers is whether moral judgments are primarily the fruits of reason or of emotion. One tradition believes that moral judgments are largely the output of our emotional system. A competing tradition holds that while emotions are often heavily involved in the process of moral judgment, at heart our moral beliefs exist because of the distinctly human ability to reason - and thus distinguish right from wrong. Reason according to the standard dictionary definition is defined as "That which explains or accounts for any fact, act, proceeding or event". Emotion is defined as "an act or state of excited feeling", whereas moral means "dealing with or capable of distinguishing between right and wrong in conduct". Both reason and emotion are necessary to solve a moral dilemma. Reason itself is the process of mentally and consciously thinking something through with a sound sense of logic. Reason goes hand in hand with independence, where one gives moral law to one's self, by reasoning our mortality that we've acknowledged. This leads onto the idea of personal moral beliefs, which will be covered later. ...read more.

Without context, reason is non-existent. The same can be argued of emotion. However, reason acquires the facts and answers its logical decision. The only change exhibited is due to incorrect or useless facts. Emotion can change drastically over time and information given or proven wrong or useless. Emotion is considered a variable due to its extreme potential. Without a context, it cannot be classified as chaotic nor ordered, as it completely depends on the situation to generate the emotion itself. Unlike reason, one cannot be "taught" emotions. Humanity cannot put into words exactly what emotions are but still experiences them. It is the foundation of the arts that imprints emotion into the physical world for us. Thus, the artist has almost nothing to express without their emotions. The specific categories and types of arts could have never flourished without emotion, for reason by itself would label art as an unnecessary part of humanity. To explain how vastly complex emotions are, consider the following example. Blue and azure are both relatively the same word. However azure signifies a more specific response that humanity links with previous events and images. ...read more.

At a certain point, this can become so large that it becomes a cultural or even global viewpoint. In most civilized parts of the world, killing people is seen as a crime. This at one point was not true and is still false in some countries that are rife with war or just not civilized enough to have established this. However, morals cannot be fully determined without a specific enough context, otherwise we are presented with conflict. A lack of context leads to too many variables, which does not allow a stable foundation for morals to exist upon. Thus, we must have juries to decide what happens to the convicted, as one person cannot conceive and decide upon all possibilities alone. The amount of reason and emotion needed to justify moral decisions depends on the personal moral belief of the individual and the context of the situation. However, due to how closely interrelated both emotion and reason are, it is difficult to say they are not equally necessary in justifying most decisions. The areas of knowledge where reason diverts from emotion is when one is presented with an ordered system, such as math or some sciences. The reciprocal effect works for emotion and its areas of knowledge, such as art. ...read more.