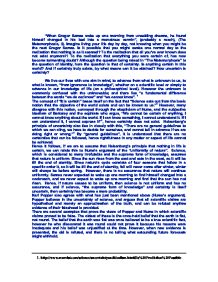 "When Gregor Samsa woke up one morning from unsettling dreams, he found himself changed in his bed into a monstrous vermin", (probably a roach), (The Metamorphosis, 3). Imagine living your life day by day, not knowing when you might be the next Gregor Samsa. Is it possible that you might awake one normal day to the realization that nothing is as it seemed? To the realization that all you've ever known does not exist anymore?! To the realization that everything you were certain of, has now become tormenting doubt? Although the question being raised in "The Metamorphosis" is the question of identity, here the question is that of certainty. Is anything certain in this world? And if certainty truly exists, by what means can it be attained? How uncertain is certainty? We live our lives with one aim in mind, to advance from what is unknown to us, to what is known, "from ignorance to knowledge", whether on a scientific level or simply to advance in our knowledge of life (on a philosophical level). However the unknown is commonly confused with the unknowable; and there lies "a fundamental difference between the words "we do not know" and "we cannot know". 1 The concept of "It is certain" bases itself on the fact that "Science sets out from the basic notion that the objective of ...read more.

Popper believes in the uncertainty of science, and argues that all scientific claims are hypothetical and merely an approximation of the truth, and can be refuted anytime evidence of their falsehood is provided. There are several examples that prove the views of Popper and Hume in which scientific claims proved to be false. The oldest of these is the once-held belief that the earth is flat, not round. The belief that the earth was flat was once believed to be a true scientific fact, however he who discovered it was round could not prove it because his reasons were inadequate and his belief was unjustified at the time. However, when new evidence is presented, the old is refuted, and there is no telling what astounding future forecasts might withhold. The scientific field of medicine was once most proud of its latest invention of Vioxx, the only medicament that could cure inflammatory diseases in its time. It was immediately spread worldwide for its believed immediate and effective cure. However, it was soon discovered that it lead to myocardial infections that were fatal and was banned. This is yet another example, where medicine, one of the most advanced and iable fields of science fails the test of certainty. ...read more.

Can we live in a world where at any point we might find ourselves turned into cockroaches? Can we live in a world dominated by uncertainty? Is passionate conviction sufficient to justify knowledge and hence certainty? Traveling through this maze, I am quite certain of the following: There is no absolute certainty in the world. Knowledge cannot be obtained through one source alone but through a number of different sources. As an independent thinker entitled to an individual opinion, passionate conviction can justify knowledge and is itself, i.e. it needs no justification. However, this holds true only when it is knowledge on a personal level. We cannot apply or enforce our beliefs on the majority and expect them to believe in them as well. In the case where passionate conviction can justify knowledge, it becomes certainty relative to the individual himself only, even though reason, logic, and science might contradict it. The maze connecting certainty vs. uncertainty is never ending. It is intricately and complexly laced in a web-like structure. It will take you your whole life to get past a quarter of it, to be certain of a quarter of your wonders and questions. You will never reach the end, (certainty), because that would mean you have uncovered the secret to the mystery of life and the universe, which is impossible to reach, and if miraculously reached, you have lost the meaning and worth of living. 1. http://www.marxist.com/science/uncertaintyandidealism.html#Is%20Prediction%20Possible ...read more.