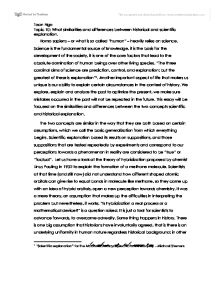 Homo sapiens - or what is so called "human" - heavily relies on science. Science is the fundamental source of knowledge, it is the basis for the development of the society, it is one of the core factors that lead to the absolute domination of human beings over other living species. "The three cardinal aims of science are prediction, control, and explanation; but the greatest of these is explanation"1. Another important aspect of life that makes us unique is our ability to explain certain circumstances in the context of history. We explore, explain and analyze the past to optimize the present, we make sure mistakes occurred in the past will not be repeated in the future. This essay will be focused on the similarities and differences between the two concepts scientific and historical explanation. The two concepts are similar in the way that they are both based on certain assumptions, which we call the basic generalization from which everything begins. Scientific explanation based its results on suppositions, and those suppositions that are tested repeatedly by experiments and correspond to our perceptions towards a phenomenon in reality are considered to be "true" or "factual". Let us have a look at the theory of hybridization proposed by chemist Linus Pauling in 1932 to explain the formation of a methane molecule. Scientists at that time (and still now) did not understand how different shaped atomic orbitals can give rise to equal bonds in molecule like methane, so they came up with an idea of hybrid orbitals, open a new perception towards chemistry. ...read more.

The WWII started in 1939, the bombing of Hiroshima and Nagasaki...are mere irrefutable facts so we can offer a non-controversial interpretation of the "objectivity of the past". This objectivity does not hold when historians take into consideration of abstract events, for example, the Taiping Rebellion, a large-scale revolt in China from 1850 to 1864, during the Qing dynasty. Explaining an event that happened in this Rebellion (why did it start, why Hong Xiuquan, the leader, can attract so many people) requires a great accumulation of factual information, and the event of the Taiping Rebellion is the product of knitting all the facts together, which does not constitute an objective historical entity. Differently, objectivity in science is more obvious and straight forward. Science is supposed to be completely impartial, it is neutral to a communist or a capitalist. "To hear something is 'scientifically proven' is almost the same thing as hearing that it is 'definitely true'4. No one would refute the concepts in Newtonian physics, no one would not agree that the earth is revolving about the sun. Science is something that is free from controversial, supposedly. The fact that most of us are living relying on the help of technology imposes on ourselves the truth science is absolutely "right", or "objective". Unfortunately, despite its objective nature, sometimes it is used for personal purposes. A famous controversial topic is the landing on the moon of the USA. The landing was filmed, and it was thought to be true since science (cameras) ...read more.

Being critical, we can't say whichever of them is more important, since there's a difference in the purpose of scientific and historical explanations. Scientific explanation helps us to understand the world we live, hence we can utilize resources to optimize our lives while historical explanation helps us to explain the past, learn from the past and prevent the past to happen again in the future. We learned about the outbreak of WWI and WWII to prevent the threat of WWIII. Each of the two has its own priority and importance. The two concepts have similarities and differences. Those similarities and differences have been illustrated throughout the essay, providing a better understanding of what science and history are. The two concepts are both crucial in human's development, contributing to promote human to be the most dominant species in the Earth while human has only existed for twenty thousand years - a short period of times compared to other species like reptile; it is not a hyperbole to say, those two concepts are the reasons for our survival - "survival for the fittest". 1 "Scientific explanation" for the Macmillan Encyclopedia of Philosophy - Michael Strevens 2 "Philosophy of History" - Stanford Encyclopedia of Philosophy - Daniel Little 3 "Theory of Knowledge" - Nicolas Alchin - Page 125 4 "Theory of Knowledge" - Nicolas Alchin - Page 15 5 http://www.apfn.org/apfn/moon.htm ?? ?? ?? ?? Toan Ngo Topic 10: What similarities and differences between historical and scientific explanation. ...read more.