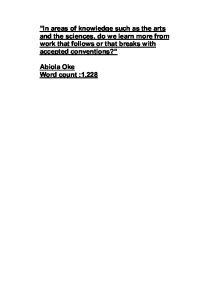 The issue with science as oppose to art is a little different. Nevertheless on the objective knowledge such like science are different. Science depends on fact in order to find the truth, unlike art when the convention is broken by people's minds, in science conventions are broken from the findings of observation and empirically testing things. Therefore we gain more understanding from work that breaks tradition. By breaking conventions a scientist can learn how the cosmos actually works, but also can learn how the previous principal structures was faulty. For example Galileo2, an Italian philosopher who played a role in the scientific revolution broke conventions in astrology when he found that the earth was not in the centre of our galaxy but the sun. Another example is the knowledge of bacteria. People were not aware of the invisible world. The convention at that period believed that doctors reacted with opposition at suggestions to cleanse their hands when moving from autopsies to childbirth. As bacteria was discovered, the finding broke with the conventional thoughts at that period of time, it revolutionized humanity of medicine so therefore we could that a great deal is learnt about reality from this breaks in convention. On this note we use reason and facts over our own intuition so the mistakes will be minimised. ...read more.

Although we gain more knowledge from work that breaks conventions and the breaks will continue to occur as time progresses. The two phases to the development of learning, which I think we gain the same from those. We learn knowledge in the first phase, which is useful, and gain higher-level knowledge in the second phase, the factual. The old knowledge is always incorporated in to the new knowledge so no knowledge is lost. At the present time people suppose that the break is essential so therefore promote break in convention. But there are at all times bad breaks, and these breaks have consequences. Rather than reacting to achievement or failure, we tend to progress and move to other stages of cognition and behaviour in order to respond to the changes of what we perceive as the present trend and the new conventional knowledge. In conclusion followed convention and break convention are two phases of circulating one another. With follow conventions we can gain basic knowledge, which is the basis of learning. The two reasons we break conventions are that society develops similar to art, where people taste with time affect conventions. The other look at science and how new knowledge modifies old knowledge. We learn from both areas of knowledge but we have learnt more knowledge the break in conventions is inevitable. 1 www.artmovements.co.uk/cubism.htm 2 www-groups.dcs.st-and.ac.uk/~history/Mathematicians/Galileo.html, Galileo: Man of science by Emma Mcmulina 3 inventors.about.com/od/gstartinventors/p/Hans_Geiger.htm 4 www-groups.dcs.st-and.ac.uk/~history/Mathematicians/Euclid.html ...read more.