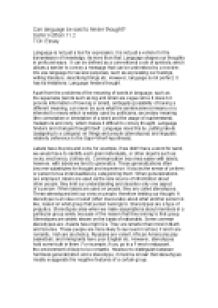 TOK essay- Can language be said to hinder thought?

﻿Can language be said to hinder thought? Samir Kothari 11.2 TOK Essay Language is not just a tool for expression; it is not just a vehicle for the transmission of knowledge, its more than that. Language shapes our thoughts in profound ways. It can be defined as a conventional code of symbols, which allows a sender to convey a message that can be understood by a receiver. We use language for several purposes, such as expressing our feelings, writing literature, describing things etc. However, language is not perfect, it has its limitations. Language hinders thought. Apart from the problems of the meaning of words in language, such as its vagueness (words such as big and small are vague since it does not provide information of how big or small), ambiguity (possibility of having a different meaning, can never be sure what the sentence/word means or is intended to mean) which is widely used by politicians, secondary meaning (the connotation or denotation of a word and the usage of euphemisms), metaphors and irony; which makes it difficult to convey thought. ...read more.

However, stereotypes hold some truth in them. For example, if you go in a French restaurant, the environment id likely to be romantic. However to distinguish between harmless generalization and a stereotype, it must be known that stereotypes mostly exaggerate the negative features of a certain group. Linguistic relativity also known as the Sapir-Whorf hypothesis (however this is a misnomer) states that language determines our experience of reality, and we can see and think only what our language allows us to see and think. Linguistic relativity is the linguistic theory that the semantic structure of a language shapes or limits the ways in which a speaker forms conceptions of the world. Since the Sapir-Whorf hypothesis claims that language determines the way we think, it can be defined as a form of language determinism. A popular example would be about the Inuit. They are said to have many different words for snow. Since the have such sophisticated vocabulary for the word snow, they are able to distinguish and describe snow in a broader spectrum. ...read more.

The women spoke in English with their husband, children and other speech situations, however spoke Japanese together to gossip or discuss about their lives at home. Since they spoke in two languages, they inhabited to different language worlds, where each of them thought differently in each of the language worlds. The experiment went such that two interviews took place with the same questions, however the difference between them were that, one was asked in Japanese, and the other in English, and the results were astonishing. For example: Real friends should? help each other (Japanese)?be very frank (English). As seen, there was a large difference in the attitude of the speaker when speaking in different languages, thus concluding that the language changes thought. Language is not perfect, and tends to hinder thought. As seen through the Japanese women, people who speak different languages think differently. Labels cause people to think of things as part of a category instead of individually, which causes them to ignore a particular thing?s individuality. And, stereotypes give false interpretations (though sometimes true) of people solely based on the group that they belong to. Therefore to conclude, language does hinder thought. ...read more.