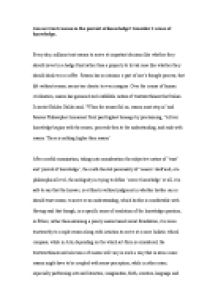 TOK Essay - Can we trust reason in the pursuit of knowledge? Consider 2 areas of knowledge

Transfer-Encoding: chunked ﻿Can we trust reason in the pursuit of knowledge? Consider 2 areas of knowledge. Every day, millions trust reason to arrive at important decision like whether they should invest in a hedge fund rather than a property to trivial ones like whether they should drink tea or coffee. Reason has so intrinsic a part of one?s thought process, that life without reason, seems too chaotic to even imagine. Over the course of human civilization, reason has garnered such infallible notion of trustworthiness that Italian Scientist Galileo Galilei said, ?When the senses fail us, reason must step in? and famous Philosopher Immanuel Kant paid highest homage by proclaiming, ?All our knowledge begins with the senses, proceeds then to the understanding, and ends with reason. There is nothing higher than reason?. After careful examination, taking into consideration the subjective nature of ?trust? and ?pursuit of knowledge?, the multi-faceted personality of ?reason? itself and, at a philosophical level, the ambiguity in trying to define ?correct knowledge? at all, it is safe to say that the knower, is at liberty without judgment in whether he/she can or should trust reason, to arrive at an understanding, which he/she is comfortable with. Having said that though, in a specific sense of resolution of the knowledge question, in Ethics, rather than assuming a purely ...read more.

The utilitarian would pull the lever, the deontological would not, the emotivist will eventually act out of impulse, the supernaturalist could go either way and so on. All knowers, channelizing their sense of reason in different directions have arrived at unique moral choices. Reason has provided a framework for judicious and satisfactory contemplation of individual right and wrong. It is rather difficult to show validity in the counter-claim of reason not being trusted in the pursuit of knowledge, since reason is so omnipresent in one?s thought process, that whether it be imagination or emotional or intuition or faith, reason, in its purest connotation, is being used as a motive to justify the respective ways of knowing. On further exploration, the exclusivity of trust the knower places in reason differs and is an individual trait. For example ? In my personal sphere, I don?t exclusively jeopardize my entire morality on the faculty of ?reason? alone. I eventually arrive at the resolution of ethical dilemmas by a combination of intuition, emotion and reason. A second issue is the much debated validity of reason itself. Many argue that reason and rationality itself might have a cultural bias or conditioning bias. If such bias is agreed upon, how trustworthy is ?reason? then as compared to ?emotion?? ...read more.

On a deeper note, what is ?correct knowledge? in Art? Is there any such thing as accurate and trustworthy knowledge in Art? Is there something specific that the artist is trying to convey, or is Art?s primary role to invoke a subjective response of the viewer? As Aristotle once said, ?The aim of Art is to represent not the outward appearance of things, but their inward significance?. In that sense, Art might not be conveying any concrete knowledge principles at all but merely providing a channel of expression for the Artist himself/herself. Having said this, there is then nothing ?wrong? in trusting reason in trying to gain the most meaning of the artwork since, the inner significance is both personal and unique to each knower. Before resolving the knowledge question of whether reason can be trusted or not in the pursuit of knowledge, one has to realize the personal and idiosyncratic nature of trust to each knower, the ambiguity of ?correct knowledge?, and the multifaceted nature of ?reason? itself. Knowledge after all, might just be one?s own take on the external and internal world around and might not have a relative benchmark of comparison. Therefore, one is at liberty to trust reason in the pursuit of his/her own knowledge, if the knower finds it reliable to do so. ...read more.