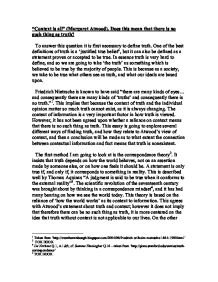 Tok essay- context is all

"Context is all" (Margaret Atwood). Does this mean that there is no such thing as truth? To answer this question it is first necessary to define truth. One of the best definitions of truth is a 'justified true belief', but it can also be defined as a statement proven or accepted to be true. In essence truth is very hard to define, and so we are going to take 'the truth' as something which is believed to be true by the majority of people. This is because as a society, we take to be true what others see as truth, and what our ideals are based upon. Friedrich Nietzsche is known to have said "there are many kinds of eyes... and consequently there are many kinds of 'truths' and consequently there is no truth."1. This implies that because the context of truth and the individual opinion matter so much truth cannot exist, as it is always changing. The context of information is a very important factor in how truth is viewed. However, it has not been agreed upon whether a reliance on context means that there is no such thing as truth. This essay is going to explore several different ways of finding truth, and how they relate to Atwood's view of context, and then a conclusion will be made as to what extent the connection between contextual information and fact means that truth is nonexistent. ...read more.

This theory is based more on thinking about an idea, or truth, unlike the correspondence theory which relies more on experiencing a truth ourselves. Knowledge by testimony can be achieved through this method of thinking, for it involves seeing how coherent a piece of evidence is and using this as a base for finding the truth; an example of this would be the O. J. Simpson murder trial, where there was no clear set of evidence to rely upon. Coherence is also good at establishing the truth of an empirical proposition. It can be particularly helpful as a negative test of truth, and means that we do not need to investigate every outlandish claim. The coherence theory implies that as long as a truth can be taken in context with other beliefs, it is undoubtedly in existence; thus backing up Atwood's assertion. However there are some criticisms of this theory. One of these being that coherence is not sufficient to determine truth. Though it is a good negative test of truth, it is less useful as a positive test. An example being that although it is easy to say that a shark cannot be in a freshwater lake, it cannot prove that just because it is a freshwater lake it must contain freshwater bluegills. ...read more.

This suggests that truth does exist; but that it has to be based on contextual information and that no one method of finding the truth is effective in all situations. Margaret Atwood is famous for her writings of dystopian novels, and they often revolve around possibilities for the future. She herself does not use truth in the official sense of the word, as her novels are mostly fictional, but she has explored the possibilities of truth and how it can change. From this exploration of various theories we have not reached a conventional conclusion. However, the one thing that seems to be consistent in the majority is the fact that truth can, and does exist: one has only to find it. Truths themselves do not change, but the contexts we can see around them do, and thus with changing contexts we find an apparent variation of truth. Truth is also not necessarily a set thing. There are varying degrees of truth, depending on how solid their base of contextual information is. To conclude, context is vitally important to the realization of truth, but it is clear that truth itself still exists: it is simply hard to find. 1 Taken from 'http://overtherainbough.blogspot.com/2004/06/friedrich-wilhelm-nietzsche-1844-1900.html' 2 TOK BOOK 3 De Veritate Q.1, A.1&3; cf. Summa Theologiae Q.16 - taken from 'http://plato.stanford.edu/entries/truth-correspondence' 4 TOK BOOK 5 Painted by George Claire (1830-1900) - taken from www.intoeuroart.com 6 TOK BOOK 7 TOK BOOK ?? ?? ?? ?? ...read more.