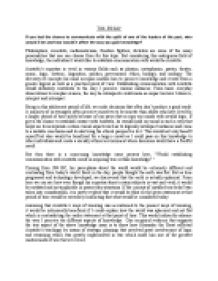 Tok Essay. If you had the chance to communicate with the spirit of one of the leaders of the past, who would it be and how would it affect the way you gain knowledge?

﻿TOK ESSAY If you had the chance to communicate with the spirit of one of the leaders of the past, who would it be and how would it affect the way you gain knowledge? Philosophers, scientists, mathematicians, freedom fighters, dictators are some of the many personalities that one can choose from for this topic. But considering this ambiguous field of knowledge, the individual I would like to establish communication with would be Aristotle. Aristotle?s expertise is vivid in various fields such as physics, metaphysics, poetry, theater, music, logic, rhetoric, linguistics, politics, government, ethics, biology, and zoology. The diversity of concepts his mind occupies enables him to perceive knowledge and events from a greater logical as well as a practical point of view. Establishing communication with Aristotle would definitely contribute to the way I perceive various instances. From basic everyday observations to complex science, the way he introspects could make an impact on how I observe, interpret and introspect. ...read more.

? Coming from 384 BC, his perceptions about the world would be extremely different and contrasting from today?s world. Back in the day, people thought the earth was flat. But as time progressed and technology developed, we discovered that the earth is actually spherical. From here we can see how even though his expertise about certain subjects is vast and vivid; it would be outdated and not applicable in present day situations. If the concept of justified true belief was taken into consideration, it is pretty evident that it would be false as the given statement at that period of time would be extremely conflicting that what would be considered today. Assuming that Aristotle?s ways of knowing was accustomed to the present ways of knowing, it would be intrinsically beneficial if I could explain how the world was spherical and not flat which is contradicting the earlier statement at that point of time. ...read more.

Therefore, this difference in the field of knowledge between me and Aristotle will enable me to acquire a new perspective to various instances and will greatly affect the way I gain this knowledge. One personal example that I would like to share was an incident that took place recently. I watched a movie named Mississippi burning. It showed how racism was very prominent back in the 1980?s. It involved pointless killing of black people and how corruption raided government offices and police departments. Later justice was served and the black people were emancipated. Before watching this movie, I had a hasty generalization that black people in America were the ones who initially created a problem. But after watching this movie, my perception about the black people changed and it resulted in the shift of opinions. Similarly, if given the opportunity to communicate with Aristotle, it would change how I perceived various day to day life situations from a different perspective. Word Count:- 775 Pranav Menon 2171 ...read more.