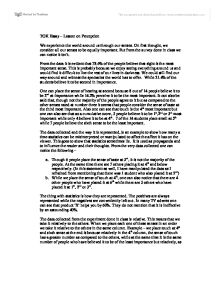 TOK Essay Lesson on Perception We experience the world around us through our senses. On first thought, we consider all our senses to be equally important. But from the survey done in class we can notice it isnt.

TOK Essay - Lesson on Perception We experience the world around us through our senses. On first thought, we consider all our senses to be equally important. But from the survey done in class we can notice it isn't. From the data it is evident that 78.6% of the people believe that sight is the most important sense. This is probably because we enjoy seeing everything around us and would find it difficult to live the rest of our lives in darkness. We could still find our way around and witness the spectacles the world has to offer. While 21.4% of the students believe it to be second in importance. One can place the sense of hearing at second because 8 out of 14 people believe it to be 2nd at importance while 14.2% perceive it to be the most important. It can also be said that, though not the majority of the people agree to it but as compared to the other senses rated at number three it seems that people consider the sense of taste at the third most important. ...read more.

(In this statement as well, I have manipulated the data as I refrained from mentioning that there was 1 student who also placed it at 2nd) b. While we place the sense of touch at 4th, one can also notice that there are 4 other people who have placed it at 6th while there are 5 others who have placed it at 1st, 2nd or 3rd. The thing with statistics is how they are represented. The positives are always represented while the negatives are conveniently left out. In many TV adverts one can see that product 'X' helps you by 60%. They do not mention that it is ineffective by an astounding 40%. The data collected from the experiment done in class is relative. This means that we take it relatively to the others. When we place each one of these senses in an order we take it relative to the others in the same column. Example - we place touch at 4th and sixth sense at the end is because relatively in the 4th column, the ...read more.

if one P5 nation vetoes it, the resolution cannot be passed. The Germans used it to their advantage during the WW2 to prosecute and annihilate countless number of Jews. The order of importance of the senses also changes with the profession one does. For a cheese or wine taster, the sense of taste is probably the most important but for a movie critic the sense of sight most probably is. Whilst at the same time for a food critic the both these senses are equally important as presentation and appearance also count. But without the sense of smell, it is said that our sense of taste decreases so this makes both these sense supplementary. For a musician the sense of hearing is essential. At the same time, for a professional gambler, the sixth sense plays a very important and pivotal role while it may be completely redundant to other professions. This is how senses affect us in our lives and how many a time statistics lie and whether the notion of majority or miniroty is open to interpretation. I believe it finally all comes down to relativity, how one thing compares to others ...read more.