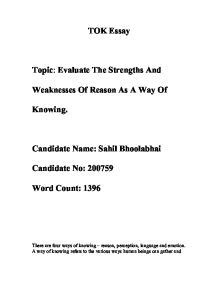 TOK Essay Topic: Evaluate The Strengths And Weaknesses Of Reason As A Way Of Knowing. Candidate Name: Sahil Bhoolabhai Candidate No: 200759 Word Count: 1396 There are four ways of knowing - reason, perception, language and emotion. A way of knowing refers to the various ways human beings can gather and extrapolate information - primarily through the ways mentioned above. Every individual has a distinct view of reason. Reason is best described by me as "gathering information and data and carrying out logical steps in order to reach a conclusion in order to prove a certain thing. An epitome of reason is-the reason for advancement in technology in the twenty first century is due to numerous applications and discoveries in physics. Reason is a way of knowing which is comprised of diverse fundamentals. In order to justify a reason lucid explanations and logic is particularly requisite. Reason also involves correct interpretation of ideas based on logic. Reasoning provides the foundation of supporting or contradicting an idea, myth, ideal, etc. This forms the major strength of the power of reasoning. However, our sense of reasoning can be overpowered by our emotions and sense of perception. .The very essence of reason can be determined by investigating its value in context with the other ways of knowing -emotion, perception and language and linking reason with the various areas of knowledge. ...read more.

Generally a trial involves two types of lawyers - one who supports an individual and another who is against that individual. A common case would be a man being accused of trying to murder another person, .Both these men hire lawyers to support their claims. The ability of the lawyers to gather conclusive evidence and provide lucid explanations, use effective reasoning techniques to the magistrate, the chief judge, who eventually makes a decision on the trial, will have a decisive impact on the magistrate's decision. Hence; effective reasoning by lawyers plays a major role in deciding the plight of a case. The power of reasoning in court by the lawyer will decide whether the guilty is punished or not. Reasoning can also be influenced by perception - the way a person perceives a situation. Perception involves the way our senses adjust to circumstances. For example, each student's interest in a subject is entirely based on the way they perceive the subject. One student may be enthralled by Physics whereas another one might be fascinated by Economics. Perception is thus the primary reason for a difference in the interest of each student. Thus perception forms a pivotal reason for a significant variation in the likes and dislikes of people. But reason based on perception has its flaws as well because reason based on perception is entirely based on the ability of our senses to adjust to a situation and it is based on intuition. ...read more.

Sometimes people do crazy things while in love because they are swayed excessively by their emotions of love and they lose all their power of reasoning and common sense. Lucid explanations and deciphering of facts form the way of expressing reason. A person's ability to prove a point by means of clear speeches or correct interpretations ideas will decide whether he is right or wrong. If somebody can prove his point clearly and correctly nobody will contradict him. But language can also form a barrier to reason. If someone has a point to prove but cannot explain his ideas clearly nobody will understand his process or reasoning. Thus one has to realize how to present his ideas and subsequently reason in the correct manner. Reason, thereby serves as an efficient way of knowing as it enables us to think of a situation as a neutral and assess the situation without being swayed by our perceptions and emotion. It enables to us comprehend information and summarize the meaning of the information given to us. But emotion and perception do not generally rely on the power of reason -thereby giving reason a limited role in context with these ways of knowing. Language can serve as a barrier to effective reasoning if one cannot express his ideas properly. But on the whole, I conclude by saying that reason is perhaps the most important way of knowing as it enables us to think logically and rationally before we choose to do something. ...read more.