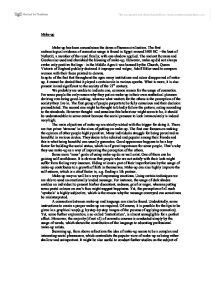 Make-up Make-up has been around since the dawn of human civilisation. The first archaeological evidence of cosmetics usage is found in Egypt around 3500 BC - the bust of Nefretiti, a member of the royal family, with eye shadow applied. The ancient Romans and Greeks also used and cherished the blessing of make-up. However, make-up did not always evoke only positive feelings - in the Middle Ages it was banned by the Church, Queen Victoria of England publicly declared it improper and vulgar, Adolf Hitler used to compare women with their faces painted to clowns. In spite of the fact that throughout the ages many institutions and rulers disapproved of make-up, it cannot be denied that it played a certain role in various epochs. ...read more.

The main objectives of make-up are strictly related with the trigger for doing it. There are two prime 'streams' in the aims of putting on make-up. The first one focuses on making the opinion of other people highly positive. Many individuals struggle for being perceived as beautiful in various circles. They desire to be admired and popular among their friends and this is what being beautiful can usually guarantee. Good appearance happens to be a key factor for building the social status, which is of great importance for some people. That's why they use make-up as a way of improving the perception of the others. Some more 'inner' goals of using make-up do as well exist. ...read more.

A connection between make-up and language can also be found. Undoubtedly, some instructions to create a proper make-up are required. Of course, it is possible for the tips to be given in a graphical way(e.g. by step-by-step images of the process of applying cosmetics). Yet, some further explanation, a so-called 'instantiation', is almost unnegligible for a perfect effect. Moreover, the majority (if not all) of cosmetic courses is conducted simply by the usage of words, which shows the contribution of the language to educating professional make-up artists. Summing up, from above reflections the idea of make-up seems to be a complex and interesting social phnonenon, which contradicts the popular view of make-up as being rather shallow and unimportant. It might be also useful to conduct further studies on the subject of doing make-up because it can become a base for revealing some psychological features of human beings. ...read more.