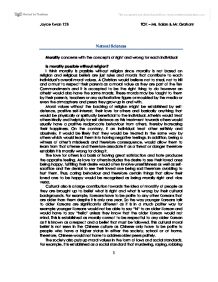 Natural Sciences Morality concerns with the concepts of right and wrong for each individual Is morality possible without religion? I think morality is possible without religion since morality is not based on religion and religious beliefs are just rules and morals that contribute to each individual's overall moral values. A Christian would believe not to steal, not to kill and a must to respect their parents as a moral value as they are part of the Ten Commandments and it is accepted to be the right thing to do however an atheist would also have the same morals. These morals may be taught to them by their parents, teachers or any authoritative figure or moulded by the media or even the atmosphere and peers they grow up in and with. Moral values without the backing of religion might be established by self-defence, positive self-interest, their love for others and basically anything that would be physically or spiritually beneficial to the individual. Atheists would treat others kindly and helpfully for self defence as this treatment towards others would usually have a positive reciprocate behaviour from others, thereby increasing their happiness. On the contrary, if an individual treat other selfishly and abusively, it would be likely that they would be treated in the same way by others which would lead them into having negative feelings. ...read more.

Should the person who invented the knife be held responsible for the fact that Julius Caesar got turned into a human pincushion? No, the knife was invented as a tool for non-murdering means. If the inventor of the knife actually killed someone with that knife, then yes, they should be held responsible. But so long as the discovery was meant to be used in a safe, non-harmful way, then the scientists should not be held responsible for another person's actions. Most of the time scientists invent something because they feel that it will help society. For example, stem cell research, this has many applications to science and treating people with diseases, but other people have to go the extra step and use it for wrong use. I am sure the inventor might feel guilt for what he made, but it is not his fault for other people's misuse. However, the atomic bomb project might be a different example. Albert Einstein along with many other scientists discovered and invited the atomic bomb during World War II and they have intended to use it as a tool for improper moral use in other words, to substantially hurt and kill others. This is the common viewpoint of mankind however it can be argued that the invention of the atomic bomb by scientists puts an end to World War II and to all the potential damages that can be caused by the attacking parties for example the German Nazis. ...read more.

Religion rejects scientific evidence to justify and support Bronze Age myths. I think religion does not reject scientific evidence, it just choose to belief Bronze Age myths and shut their eyes towards the scientific evidence laid out. Religion relies of belief and if you believe it to be true, then it is a moral truth however if you do not believe if to be true and you believe in scientific evidence or simply do not believe in either, then you would not establish it as a moral truth. Do the natural sciences make assumptions that are improvable by science? This is due to the fact that the natural science uses induction reasoning and the process of elimination. One hypothesis cannot be proven correct just because of the large sum of experiment carried out and therefore the conclusions and analysis drew out by the experiment. This is due to the fact that science only considers the limited outcomes out of the infinite outcomes and this is a major flaw within natural science since it is so controlled and a theory or law can only be proven correct when everything else is controlled. Therefore, scientific evidence and research could be unreliable for being a type of evidence. ?? ?? ?? ?? Joyce Kwan 12B TOK - Ms. Balan & Mr. Graham 1 ...read more.