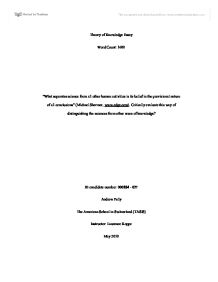 Theory of Knowledge Essay Word Count: 1600 "What separates science from all other human activities is its belief in the provisional nature of all conclusions" (Michael Shermer, www.edge.com). Critically evaluate this way of distinguishing the sciences from other areas of knowledge? IB candidate number: 000834 - 027 Andrew Pelly The American School in Switzerland (TASIS) Instructor: Laurence Koppe May 2010 "...for it is the mark of an educated man to look for precision in each class of things just so far as the nature of the subject admits: it is evidently equally foolish to accept probable reasoning from a mathematician and to demand from a rhetorician scientific proofs." - Aristotle, Nicomachean Ethics1 I. Shermer's idealistic claims about science Shermer's account of science as deeply "provisionalist" in its approach to its own knowledge claims is a misleading exaggeration - one that underplays the role of consensus and co-operation in scientific inquiry, and that fails to do justice to the intellectual-historical record of most of the natural sciences. However, it does contain a grain of truth, insofar as most scientists are ready to admit that none of their scientific beliefs are 100% certain. Conclusions in the natural sciences are arguably always provisional, as no theory within this area of knowledge is ever deductively proven. ...read more.

Scientists are liable to ignore, suppress and discredit experimental results that disprove or throw into doubt a key theory of that paradigm. Exhibiting something similar to "confirmation bias", a scientist who was trained under a certain scientific paradigm is highly unlikely to abandon that paradigm even when presented with anomalous data. The perihelion of Mercury, the time at which Mercury is closest to the sun during its orbit, was inconsistent with Newtonian mechanics for many years. Despite several ad-hoc solutions that were consistent with Newtonian mechanics (e.g. a hypothesized unseen planet called "Vulcan"), it became clear that science did not truly have an answer for this discrepancy. Einstein's general theory of relativity proposed instead that the bending of light around the sun was responsible for this anomaly7. Does this indicate that the natural sciences are in fact not provisional? Einstein appears to have "proven" Newton wrong, yet Newtonian mechanics still plays an important role in physics today. The reason Newtonian mechanics is still used is because Newton was not wrong. Newton's equations simply did not hold true for situations that he had not even considered, such as objects approaching the speed of light, and objects with a very large mass, such as planets, stars or black holes. ...read more.

As younger students of mathematics know well, assuming that integers exist conceptually is much easier than proving their existence before learning addition. V. Conclusion At face value, Shermer's claim would seem implausible. His statement that the "provisional nature of all conclusions in science" differentiates it from "all other human activity" is an absolute statement that is hard to take seriously, as it is almost certain that other human activities do hold at least some knowledge provisionally, reducing the effectiveness of the logical-positivist statement that Shermer is trying to make. Shermer's claim also fails to recognize the extensive communication and cooperation network that has characterized scientific endeavour since it has been recorded. A modern scientist depends on his forbears for the principles from which he creates a hypothesis, and if these principles of science were constantly questioned as provisional conclusions, scientific discoveries would grind to a halt in a storm of attempted falsification. Furthermore Shermer's claim contains an implicit value judgement, one open to challenge. "Provisionality" is not necessarily always a value in all areas of knowledge. "Certainty" would seem to be a more important value, at least in Mathematics. Other disciplines may or may not be more or less provisional in character. But if Mathematics is any guide, just because other disciplines hold their conclusions non-provisionally should not alone incline us to think they are incapable of producing knowledge worthy of the name. ...read more.