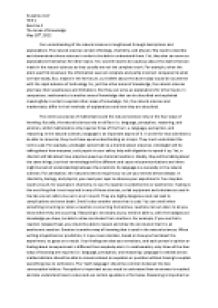 TOK Essay. The entire accuracies of mathematics and the natural sciences rely on the four ways of knowing.

﻿Ousainou Corr TOK 1 Exercise 4 The Areas of Knowledge May 18th, 2012 Our understanding of the natural sciences is lengthened through descriptions and explanations. The natural sciences consist of biology, chemistry, and physics. We need to describe and demonstrate these sciences in order to be able to understand them. Yet, they also can serve as explanations themselves for other topics. Yet, we still need to be cautious about the claims that are made in the natural sciences as they usually are not the complete truth. For example, when the atom was first observed, the information was not complete and partly incorrect compared to what we have today. But, maybe in the far future, our beliefs about the atom today would be countered with the rapid advance of technology. So, just like other areas of knowledge, the natural sciences also have their weaknesses and limitations. But they can serve as explanations for other topics. In comparison, mathematics is another area of knowledge that can be described and explained meaningfully in order to explain other areas of knowledge. Yet, the natural sciences and mathematics differ in their methods of explanations and how they are described. ...read more.

Reasoning is important as you need to be able to look at a question and the answer and see if the answer is reasonable. You need to be able to reason and see the possibilities and incorrect answers. This is how these two areas of knowledge may be established with the ways of knowing. Theory is something that can mean many different things in many areas of knowledge. In the natural sciences, a theory does not just seem to be knowledge. It is something that is not justified as it may change. It is more of supposition than anything. It is something that, maybe, when looked into in the future with greater technology, may seem to be false and a greater answer could be provided. For example, the theory of evolution could be altered in the future if the evolutionary patterns seem different and less reliable as they are today. In mathematics, however, a theory is knowledge. It is justified true belief. We are supplied with formulae and other keys that help us solve for answer. But there is only one possible answer or set of answers. ...read more.