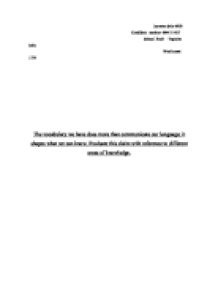 TOK essay: The vocabulary we have does more than communicate our language, it shapes what we can know.

Joonatan Salo 09IB Candidate number: 004431-027 School: Etel�-Tapiolan lukio Word count: 1579 The vocabulary we have does more than communicate our language; it shapes what we can know. Evaluate this claim with reference to different areas of knowledge. Vocabulary is the set of words used in language to communicate. They are the words that give meaning to a language. A study Building the Foundations of Literacy: The Importance of Vocabulary and spelling Development by Shane Templeton and John J. Pikulski says, " words are the labels of thoughts and beliefs". Vocabulary is and has been developed through the need to communicate things that people know and have experienced. Therefore it could be said that what we know develops vocabulary and language. However a person who reads a lot is likely to know the meaning for many words and have a larger vocabulary than someone who does not. Words can have meanings that mean almost the same thing, but differ slightly. Hence by knowing, learning and understanding vocabulary a person may learn something new that he/she did not know even existed. For example in a largely spread and globally used language like English, there may be words originating from different cultures. ...read more.

Scientific and medical language used by doctors, nurses, scientists and others in the medical field have a lot of jargon and vocabulary of their own, which other people may not understand, like for instance the words sternum and appendix. These words derive from Latin and can be hard to understand for people who are not educated in science and its different areas. The word sternum for instance is a word used to describe the breastbone. A person who hasn't studied human bone structure will not know the meaning of the word. This kind of vocabulary, language or jargon has developed through knowledge gained in a respective field of knowledge. A doctor for instance will know vocabulary for human body parts or medicine, that someone who is not a doctor or not in the medical field would not. The study of this vocabulary can however open and give new knowledge and understanding of this scientific or medical language. Jargon is present in many different fields of profession, not only science. Government officials, politicians, ministers, civil servants and generally people in the field of politics have their own type of jargon, which they use known as officialese. ...read more.

Hence the gain of new knowledge created a new concept that was unknown and it was given a name, and a new word was formed. This has been the case in many scientific discoveries, for instance similarly to James Watt the SI unit of force, which is known as Newton was named after the scientist Isaac Newton. The vocabulary we use does to some extent affect what people can know, since vocabulary is developed to describe what we know and what we have experienced. However vocabulary can also familiarize us with new knowledge that we did not know even existed. The world consists of different people from very different cultures, living conditions and lifestyles, which affect the experiences people have and the way they look at life. Since, vocabulary is formed from the need to communicate experiences and what we know, languages spoken around the world can have very varying vocabularies that can contain words carrying unique and different information. Hence we can gain knowledge from learning vocabulary, and it can broaden our understanding of the world. However initially vocabulary is developed from our experiences and knowledge, so it could be said that we in a way live in symbiosis with vocabulary and language, as they are formed from our knowledge and rely on it to stay alive, whereas we can also gain knowledge ourselves from vocabulary. Word Count: 1579 ...read more.