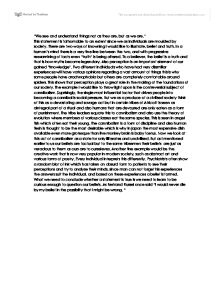 "We see and understand things not as they are, but as we are." This statement is fathomable to an extent since we as individuals are moulded by society. There are two ways of knowning I would like to illustrate, belief and truth. In a human's mind there is a very fine line between the two, and with progressive reexamining of facts even "truth" is being altered. To a believer, the belief is a truth and that is how myths become legendary. Also perception is an important element of our gained "knowledge". ...read more.

Suprisingly, the single most influential factor that drives people into becoming a cannibal is social pressure. But we as a produce of a civilised society think of this as a devastating and savage act but in certain tribes of Africa it is seen as aintegral part of a ritual and also humans that are devoured are only eaten as a form of punishment. The tribe leaders equate this to cannibalism and also use the theory of evolution where members of various classes eat the same species. This is seen in angel fish which often eat their young. ...read more.

Another fine example would be the creative work that is now very popular in modern society, such as abstract art and various forms of poetry. Every individual interprets this differently. Psychiatrists often show a random blot of ink which has taken an absurd form to patients to see their perceptions and try to analyse their minds, since man can not forget his experiences the answers suit the individual, and based on these experiences a belief is formed. What we need to conclude whether a statement is true is we need to learn to be curious enough to question our beliefs. As Bertrand Russel once said "I would never die by my belief in the possiblity that I might be wrong. " ...read more.