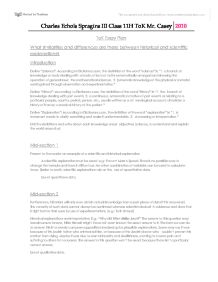 ToK Essay What similarities and differences are there between historical and scientific explanations?

ToK Essay Plan What similarities and differences are there between historical and scientific explanations? Introduction Define "Science": According to Dictionary.com, the definition of the word "science" is: "1. a branch of knowledge or study dealing with a body of facts or truths systematically arranged and showing the operation of general laws: the mathematical sciences. 2. Systematic knowledge of the physical or material world gained through observation and experimentation." Define "History": According to Dictionary.com, the definition of the word "history" is: "1. the branch of knowledge dealing with past events. 2. a continuous, systematic narrative of past events as relating to a particular people, country, period, person, etc., usually written as a chronological account; chronicle: a history of France; a medical history of the patient." Define "Explanation": According to Dictionary.com, the definition of the word "explanation" is: "1. A statement made to clarify something and make it understandable. 2. A meaning or interpretation." Link the definitions and write about each knowledge areas' objectives (science, to understand and explain the world around us) Mid-section 1 Present to the reader an example of a scientific and historical explanation. A scientific explanation must be exact e.g.: Force = Mass x Speed. There is no possible way to change the formula and have it still be true. No other combination of variables can be used to calculate force. Similar to math, scientific explanations rely on the use of quantitative data. ...read more.

Historians are constantly using secondary data and carrying out desk research if they didn't witness the event they are studying. Scientist can always use primary data when they carry out experiments. Both knowledge areas rely on perception, but perception is used in different ways. A historical event only genuinely happens once and this specific event cannot be replicated in the precise circumstances as the original occurrence. Scientists usually base their experiments on ones done in the past, but they can be simulated in the same way. Furthermore, historians will only ever obtain actual knowledge from a past piece of data if it is recovered. The veracity of such data cannot always be confirmed whereas scientists aim to find the veracity of facts and find ways to prove it. Historical and scientific explanations have several similarities. It is of my belief that the main connection between them is the way in which they are conceived. In both knowledge areas, the explanations are composed by recording events what happens, yet to affirm that "to come up with either a historical or scientific explanation, you must record what happens" makes things seem much simpler than they really are. Let's use history as an example. There isn't always a reliable source to eyewitness important historic proceedings. We must consider that the accountancy of a happening cannot be made if there wasn't anyone to witness it. To account for a happening and not be sure of its veracity, you must have different pieces of evidence and opinions which support its authenticity. ...read more.

Furthermore, historians will only ever obtain actual knowledge from a past piece of data if it is recovered. The veracity of such data cannot always be confirmed whereas scientists deal with evidence and data that is right before their eyes by use of experimentations. (e.g.: Turin shroud) Science and History do cross paths more frequently than thought though. Both resort to giving different points of view when lacking evidence. Science does this to explain the Big Bang theory for example. Nobody was actually there to see what happened and if it was true or not, but scientifically speaking, it was the most plausible thing that could have happened, therefore the scientific knowledge previously acquired was used to back up this theory. I think the key difference between history and science is that a scientific experiment can be recreated whereas history can only be experienced once. When writing a lab report for science, it is important to show the procedure clearly so that other people can base their experiments on yours, and recreate the same results- this sets science apart from time. History is confined to the past. It can never be recreated and it can only be experienced once. I believe that the boundary separating science from history is that instead of relying on what others experienced in the past and told us about is less precise and less impacting than a discovery that can be tested and reconstructed in the present. 1 Dictionary.com 2 Dictionary.com 3 Dictionary.com 4 phstok.blogspot.com 5 Wikipedia - Ben Johnson ?? ?? ?? ?? Charles Echols Spragins III Class 11H ToK Mr. Casey 2010 ...read more.