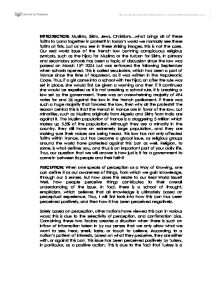 TOK - French Headscarf Ban - This law has not only affected faiths within France, but has become a global issue, as religious groups around the world have protested against this ban as well. Religion, to some, is what defines you, and thus is an important

INTRODUCTION: Muslims, Sikhs, Jews, Christians...what brings all of these faiths to band together in protest? In today's world we normally see these faiths at fists, but as you see in these striking images, this is not the case. Our real world issue of the French law banning conspicuous religious symbols, such as the hijab for Muslims or the turban for Sikhs, in primary and secondary schools has been a topic of discussion since the law was passed on March 15th 2004 but was enforced the following September when schools opened. This is called secularism, which has been a part of France since the time of Napoleon, as it was written in the Napoleonic Code. Thus, if a girl came into a school with her hijab on after the rule was set in place, she would first be given a warning and then if it continued she would be expelled as it is not breaking a school rule, it is breaking a law set by the government. There was an overwhelming majority of 494 votes for and 36 against the law in the French parliament. If there was such a huge majority that favored the law, then why all the protests? The reason behind this is that the French in France are in favor of the law, but minorities, such as Muslims originally from Algeria and Sikhs from India are against it. ...read more.

These protests - that might seem violent - can change their views, such that they might fall into extremism as they see the plight of their people. On the other hand, young children from the point of view supporting the ban, might start to discriminate against these protestors, as it can be seen as disturbers of peace. REASON: Moving onto reason. Reason is based on a premise from which it is followed up by a conclusion. A premise, in logic, is called an assumption. So how is this connected to the issue of the ban of religious symbols? Well, the French government's reasoning behind this law was built upon the beliefs of secularism. Secularism encourages that state affairs should be separate from religion, but does this give reason to the ban? The positives of the ban on to which the French government beliefs are set upon are that by separating the state and religion, the government can perform its duties without giving special treatment to any particular group, especially since France is so diverse. The government's reasoning was based on that religion separates people, rather than brining them together. This is based on the idea that by eliminating religious symbols everyone can be looked at the same way, and will be identified as a person from France, rather than by their religion. ...read more.

This is not to say that people do not naturally believe in their Islam, but the laws put in place are extremely restrictive. This issue presents the opposite situation of when the government is too involved in the faith of the people, which limits their freedom of choice, which is limited in Saudi Arabia. An example of this would be the restrictions put on women and whether they are allowed to drive. Although, this is also what the ban in France has done as well, it has limited people's choice as everyone has to conform to one identity. This freedom of choice can also be connected to another real world issue as the freedom of choice and faith relates to the freedom of speech and speaking one's mind. In Hyde Park in England, there is a "speaker's corner" where previously one was allowed to talk about anything that came to mind; whether it be about the government, or the economy or anything else. Although in recent times the police have been stationed in that area in order to stop extremists from speaking. This is basically taking away a person's freedom of speech, although there is validity in placing police officers there, as a person might get out of hand. This is similar to the ban on headscarves, which is basically a ban on the freedom to express one's religious beliefs. Thus, all of these issues are closely related to each other. ...read more.