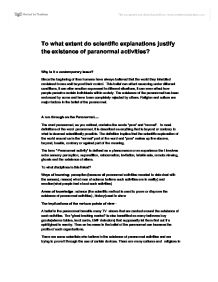 To what extent do scientific explanations justify the existence of paranormal activities? Why is it a contemporary issue? Since the beginning of time humans have always believed that the world they inhabited contained forces well beyond their control. This belief can affect reasoning under different conditions, it can alter emotion expressed in different situations, it can even affect how people perceive certain individuals within society. The existence of the paranormal has been embraced by some and have been completely rejected by others. Religion and culture are major factors in the belief of the paranormal. A run through on the Paranormal..... The word paranormal, as you noticed, contains the words "para" and "normal". in most definitions of the word paranormal, it is described as anything that is beyond or contrary to what is deemed scientifically possible. The definition implies that the scientific explanation of the world around us is the "normal" part of the word and "para" makes up thw aboeve, beyond, beside, contrary or against part of the meaning. The term " Paranormal activity" is defined as a phenomenon or an experience that involves extra sensory perception, superstition, reincarnation, levitation, telekinesis, remote viewing, ghosts and the existence of aliens. ...read more.

Knowledge Claim 1- Area of Knowledge-History Agatha Rosen had disappeared during a morning walk with her friends. She had simply been walking and her body began to vanish. However, her foot steps could still be seen and people believed she might have walked into a different parallel dimension. Paranormal investigators were hired to investigate Ms. Rosen's bizarre disappearance. The used a Geiger Counter device in order to check for the radiation levels around the place of her disappearance and they found that radiation levels were going off the charts on their device. Knowledge Claim 2-Area of Knowledge-Science The Bermuda triangle, also known as the Devil's triangle, is a place in the western part of the North Atlantic Ocean. It is a place where a number of planes and aircraft have been said to mysteriously disappear. The earliest allegation of unusual disappearances in the Bermuda area took place in Sep 16, 1950, which covered the loss of Flight 19, a group of 5 US Navy planes. The flight leader was said to have seen nothing out of the unusual in his last report. ...read more.