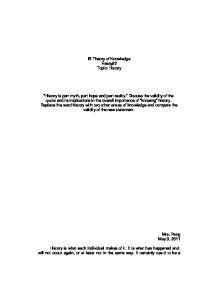 Tok History. My thesis is that although history and our ethics will always be part lies, part truth and part belief, we have to study them and apply them because its what the majority of us do and what ultimately drives us to act in the present and devel

IB Theory of Knowledge Essay#2 Topic: History "History is part myth, part hope and part reality." Discuss the validity of the quote and its implications in the overall importance of "knowing" history. Replace the word history with two other areas of knowledge and compare the validity of the new statement. Mrs. Pang May 9, 2011 History is what each individual makes of it. It is what has happened and will not occur again, or at least not in the same way. It certainly used to be a "present" time, but once that "time" passes, it defines what you used to be and that's it. Whether regretted, cherished or overlooked, you will not revisit the past, even though it may seem like it at times. Now, history is supposed to be an area of knowledge by which we can certainly learn about events that happened and people that lived before us. However, the true question that always remains is: Is History a truly, reliable source of knowledge that we can obtain accurate information from and ergo act in such a way to repeat or reform what happened in the past? Do we really know every single thing that happens, the exact way that it actually did? ...read more.

For the time being, though, it's imperative that we must have faith that all of the history that we're being exposed to is the majority of the truth. We have let historians screen what they believe to be relevant and meaningful and therefore it is only fair that we accept such history and hope that it is true because we personally won't ever presence the actual occurrence of events that took place in the past. However, there is indeed a significant amount of history that is reality that in fact happened. Whether we were there when it happened, we have been told from extremely reliable sources or we are let known from undeniable evidence, there does exist history that is completely true. We may not know the background to certain events and the true causes or motivations, but we can certainly see the outskirts and the effects of such incidents and that is the truth. If we take for example the Bible and its teachings, this is surely a clich�d example, but the effect that it has had in my life, proves the validity of the quote that was previously mentioned. Revisionists will always question events that are depicted in the Bible for their supernatural nature whether it is the creation of humanity as a result from Adam and Eve or the fact that Jesus rose again three days later after he was crucified. ...read more.

I ultimately feel independent and enjoy my days off, while she doesn't have to bear with the worry or the fear that something bad might happen to me. Does this win-win effect end up being morally wrong? Furthermore, ethics is hope because I believe that despite my untruths, and the fact that the myth says that lying is an awful vice, it might actually be a virtue to keep my mom from carrying the burden of a volatile son and instead hope that I am doing a good deed by letting her believe that I do everything as she says and under her watch. The reality of ethics, however, is that hiding the truth will always be incorrect and morally wrong and especially when it's directed towards your own mom. Nonetheless, through this quote and this example, we're able to see that ethics plays a major role in the immediate consequences that are present in everyday life especially as we gain more knowledge of them and how we decided to apply them. In conclusion, I believe that history and ethics play a significant role in the way we attain knowledge and they are the main basis of who we are as a whole and who we will become in response to grasping this new knowledge. They are, however, part myths, part hope and part reality, but that doesn't change the fact that they're crucial to the expansion and employment of our knowledge. ...read more.