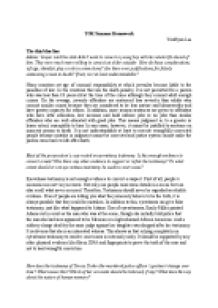 TOK How do these considerations (of age, identity) play a role in convictions? Are there ever justifications for falsely sentencing a man to death? If not, is it at least understandable?

﻿TOK Summer Homework YouHyun Lee The thin blue line Adams? lawyer said the state didn?t want to convict a young boy with his whole life ahead of him. They were much more willing to convict an older outsider. How do these considerations (of age, identity) play a role in convictions? Are there ever justifications for falsely sentencing a man to death? If not, is it at least understandable? Many countries set age of criminal responsibility at which juveniles become liable to the penalties of law. In the countries that use the death penalty, it is not permitted for a person who was less than 18 years old at the time of the crime although they commit adult enough crimes. On the average, juvenile offenders are sentenced less severely than adults who commit similar crimes because they are considered to be less mature and blameworthy and have greater capacity for reform. In addition, more serious sentences are given to offenders who have little education, low incomes and hold inferior jobs or no jobs than similar offenders who are well educated with good jobs. This means judgment is, to a greater or lesser extent, susceptible to bias. In any cases, however, it cannot be justified to sentence an innocent person to death. ...read more.

Why do they change? What does this suggest about perception, emotion and reason. How do these three interact in this case? To what extent should or can we trust perception, emotion and reason in the criminal justice system? Should or can we put more emphasis on or more weight on one over the others? According to the initial firefighters? reports, Willingham was so hysterical and Father Monaghan, a policeman chaplain, reported that Willingham was devastated and risked his life to go into the burning house. After Willingham became the prime suspect, their testimony changed. They testified against him, saying that he had not appeared very concerned. Diane Barbee, a neighbor said that he could have gone back to rescue his children and did not, saying that there had not been a lot of smoke. Monaghan said that Willingham was in complete control. This suggests that our perceptions are not entirely determined by what our senses detect. They are also determined by what we expect and what we believe. Perception is dependent upon expectation and emotional states. Therefore, testimony should never be regarded as reliable evidence. Faulty eyewitness testimony is the leading cause of wrongful conviction. Rather than relying on witness testimony, jurors need to try to perceive and understand physical and scientific evidence to make admissible judgment. ...read more.